Many years ago, I worked through most Napoleonic naval fiction writers, from C.S Forester to, probably my favourite, Douglas Reeman (Alexander Kent). As part of my Adriatic project, I sought relevant historical fiction as a break from archival research. I picked Patrick O'Brian's Ionian Mission just by the title. He has written over 20 books in this genre alone, the most famous being Master and Commander, which was made into a film of the same name, starring Russell Crowe. 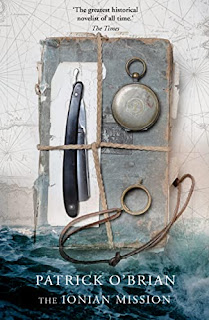 O'Brian's hero is Jack Aubrey, with his friend, the ship's doctor Stephen Maturin. In this book, Aubrey has been promoted to senior captain commanding a ship of the line that has been sent out to reinforce the squadron blockading Toulon. After the first few chapters, I remembered why O'Brien wasn't my favourite writer in this genre. He loves the fine detail of life on board a ship of the period, which is described in endless detail. In places, it reads more like social history than an action book.

In fairness, blockade duty was pretty dull, and it is broken up by one spy mission into France, although I wonder if a ship of the line would have been used on such a mission. The problem is that two-thirds of the book is taken up with the blockade. The bit I was interested in came much later when he shifted to a frigate (with supporting sloop) for a mission to the Ionian islands. There were French garrisons on the islands and neighbouring ports and competing Ottoman warlords at this time. Aubrey is tasked with choosing which one to back with artillery.

I won't spoil the story, but this part is told well and captures the confused power structures in the Adriatic. Having decided, he then has to fight one of the warlords at sea.

In hindsight, I should have cut to the book's last third. But if you like your naval fiction fast-paced, this isn't the book for you. Below is my tabletop take on the final sea battle in the book, using Black Seas models and rules. 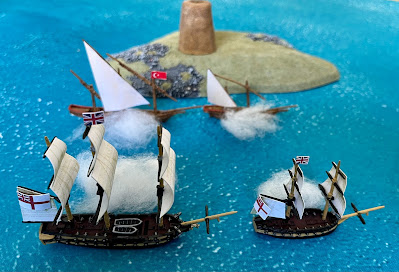