This is the fourth of Andy Johnson's WW2 novels. I absolutely loved his first book Seelöwe Nord, which assumed that Operation Sea Lion happened on the Yorkshire coast. I played a very enjoyable mini-campaign based on it, with my Matilda tanks just stopping the panzers on the River Ouse. This book is based on the Burma campaign of 1942. 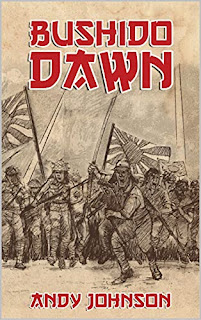 The book follows the invasion of Burma by Japanese forces and the retreat of British and Empire units to the Indian border. It wasn't Britain's finest hour, although the author in his historical note is kinder to the generals concerned than most historians have been. He fairly points out that the hastily put together forces were simply not equipped to deal with the experienced Japanese forces who could regularly outflank each defensive line. The command structure going all the way back to India didn't help.

The author doesn't break the story down into conventional chapters. Instead, you get brief sections with military-style headings that tell you the where and when of each action. This is an effective way of clearly identifying when he shifts from the strategic to the operational and then the front line. In addition, this gives the reader a comprehensive perspective of the campaign at many levels.

The Japanese side is told mainly through the lens of an infantry company. You get a clear picture of the ideology and tactics that were so successful in this campaign but sowed the seeds of later defeats. The British perspective is more detailed, and we visit a Yorkshire battalion and Indian and Gurka units. The procession of generals and the challenges they faced are fairly covered, with a limited look at the air war as well.

I really enjoyed this book. Some of the best WW2 fiction around. I hope he keeps going.

I have Japanese and British armies in 15mm and 28mm, painted mainly for the Malayan campaign. But with the exception of the Aussies, they work fine for Burma.