An Englishman at War

This new book covers the edited wartime diaries of Stanley Christopherson, DSO MC TD, by James Holland. I hadn't been rushing to read this as I thought it was about the North West Europe campaign, which is not my main WW2 interest. However, I was pleasantly surprised when I tackled this on the flight home from Kos, that he served in the Middle East. 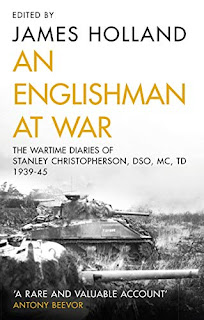 Stanley Christopherson was a relatively typical early WW2 British officer. He came from a comfortable middle-class family, privately educated, although he had seen a bit of the world, having lived in South Africa. He fought with the Sherwood Rangers Yeomanry, whose officers would traditionally be the social home of what would be called 'the county set'. As the author puts it, 'They began as little more than amateurs – horse- and sport-loving country folk with little understanding of what was about to unfold. Six years later, they finished the war as the single unit of the British Army with more battle honours than any other, having fought in the Middle East and North Africa, landed on D-Day, then led the British charge through the Low Countries and into Belgium.' Almost no member of the Rangers got through the war unscathed. Although Christopherson was wounded several times, he was one of the few to survive.

Although his diaries hide it, he wasn't altogether welcome. The colonel was not happy about having new officers assigned to the regiment. He believed it was still up to him to choose the officers for 'his' regiment. 'They worked for a living,' said another of the new officers, 'and didn't keep horses or hunt twice a week'. The British class system was probably at its worst yeomanry regiments!

They also went off to war as horsed cavalry. This sounds absurd, but we should remember that the Russians and Germans had cavalry divisions right up to the end of the war. However, it came as a shock to the Rangers on 2 July 1940 after they had arrived in Palestine. Sadly, they didn't get tanks to replace them. So, like some other yeomanry regiments, they converted to artillery duties. Stanley ended up in the siege of Tobruk. The conditions were pretty grim, and Stanley was the last of his unit to be rotated out. His diaries would have been relatively short if he had stayed much longer.

Diaries give you an insight into what people knew or were told at the time. Unlike the official history written after the event with the benefit of hindsight. Of particular interest to me was his entry that 'Turkey has made a trade agreement with Germany, which is rather distressing news.' This was unsurprising given the well-established trade links between the two countries. A later entry said, 'The colonel also told me that Turkey would probably come in against us as it appears that she is receiving more war matériel from Germany than she is from us.' This wasn't true, and German equipment supplies were modest compared to the British.

I did enjoy his entry that 'News also came through that the German and the Italian columns engaged each other! I am not surprised as we, the Germans and the Italians are all using Italian tanks!' Also, 'We have had a pamphlet sent us by the War Office on the 'extermination of rats'. With it I had a letter from the colonel appointing me RRO (regimental ratting officer), result of which has been a great deal of leg-pulling.' His entry about a 'great many' German dud shells was interesting. I will feel better about hitting nothing with mine on the wargame table in the future!

Back in Palestine, they were still low on the priority list for new tanks and had to train with a handful of them. As the desert war flowed back and forth, replacements went to serving units rather than new ones. Eventually, they got tanks and took part in the Battle of El Alamein. They then fought across Libya and throughout the Tunisian campaign. The diaries show how the British Army learned the hard lessons of the desert war, particularly the importance of combined arms tactics. He fought mainly in a Crusader tank, fast for his recce squadron but very vulnerable to German and even Italian ATGs. Of 22 officers in his regiment, 16 were battle casualties.

After North Africa, the regiment was shipped back to the UK and equipped with Shermans. They landed on D-Day and fought through Normandy. He did briefly get back on a horse to find his supporting infantry. The Rangers fought most of the NW Europe campaign parcelled out in support of infantry units. They were not in an armoured division, so they had to slog it out with few opportunities to storm through the enemy lines. He was promoted to command the regiment on 15 June 1944. Forty tank commanders had been killed or wounded since landing in Normandy. Sticking your head out of a tank was essential but deadly. Replacement officers were increasingly not from the 'county set', reflecting wider social changes in the army by the war's end.

Stanley Christopherson was undoubtedly a brave officer. He was awarded the DSO, the MC and Bar and an American Silver Star. His diaries cover most of WW2 in a level of detail you rarely see. James Holland's editing adds important context and makes the book readable. You can pick it up on Kindle for 99p at the moment. Well worth the time and money.