This is Dan Jones' first go at writing historical fiction. He has written some excellent medieval history books and is an engaging TV presenter. Apparently, George R. R. Martin inspired him to have a go. The Essex Dogs are a small unit of ten infantry taking part in Edward III's invasion of France, which led to the Battle of Crecy. 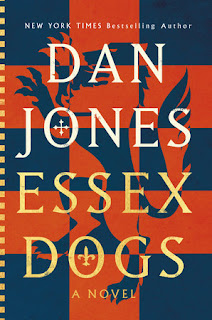 Edward III's army and fleet, numbering around 15,000 men, invaded Normandy in the summer of 1346. For the next six-and-a-half weeks, they marched, burned and fought their way from the Normandy beaches to the edge of a forest beyond the Somme called Crecy. This was one of the first campaigns of the Hundred Years' War.

Jones keeps pretty close to the historical facts and includes historical characters like the Earls of Warwick and Northampton. The Black Prince doesn't get a good write-up, although, in fairness, this was his first major campaign. I warmed to the blunt-speaking Earl of Northampton, although he should have been grateful that the Black Prince never made it to the throne!

The Essex Dogs are a fictional group of soldiers, typical of the original 'scum of the earth' who made up the English army. Their leader, Loveday FitzTalbot, commands a mixed group of infantry and archers. It was good to see non-archers get a look in, as almost all the focus in HYW fiction is on the longbow when the army still needed other types of infantry. They are often called upon to carry out special operations that Jones has gleaned from his work on the chronicles. The unit includes a somewhat stereotypical Scot. I am sure there must have been the odd Scot in the English army, but most of this character's fellow countrymen were fighting on the other side!