I was looking forward to reaching the latest in my chronological re-read of Nigel Tranter's novels. The 12th-century story of Somerled, Lord of the Isles, is one of those cases where history is better than fiction. Even allowing for limited sources. The western seaboard of Scotland is one of the finest places on earth, which only adds to the story.

Somerled was probably born in Ireland, where his father lived in exile. He was lent Irish troops to make a bid to recover his father's lands in Argyll. These included part of the mainland and the southern islands of the Hebrides. Most of this area was occupied by Vikings. He liberated the area island by island, picking off the disparate Viking hosts and building his strength.

In Tranter's story, he eventually reached as far north as Skye and Arran in the south. He married the daughter of Olaf of Man. When that king's son became an unpopular ruler, he supported the rebels and agreed to his son, Dugall, becoming King of Man. He was related to the old Celtic royal line but generally avoided plots to unseat the Kings of Scotland. Tranter has him as a supporter of King David, being present at the Battle of the Standard, although the evidence for this is weak. He may only have sent mercenary forces.

He was probably in conflict with David's successor, King Malcolm, who was not one of Scotland's finest. The isles were always semi-detached from Scotland, more concerned with the Viking threat from Norway, Orkney and Ireland. The military strength was based on ships, and Somerled could field more than 100 ships when required. These would be a mix of captured Viking longships and the smaller birlinns used in the isles.

Somerled died in 1164 at the Battle of Renfrew, sometimes called Bargarran. He led a sizeable seaborne invasion for unclear reasons. Bargarran is the site of Glasgow Airport today. His death is equally contested history. Some sources say he died in the battle, others by treachery the night before. Tranter goes for treachery and the assassin's knife. His kingdom was split amongst his sons, whose descendants are genetically liked to some of the most famous Scottish clans. Most notably, Clan Donald.

Glasgow and District Wargaming Society gamed this battle for its Open Day in 2011. The area was pretty boggy in the 12th-century, probably why Somerled chose it, to minimise the impact of Norman cavalry on his lightly armed troops. 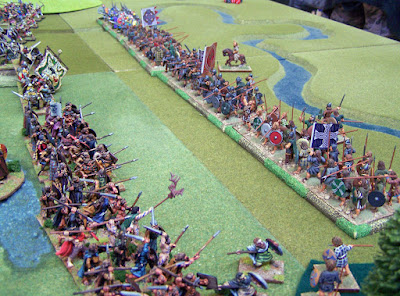