The best bit about returning to work is a lunchtime spending my book tokens on real books in a proper bookshop. The first read of my significant haul is the Osprey Campaign 281 - The Caucasus 1942-43 by Robert Forczyk. 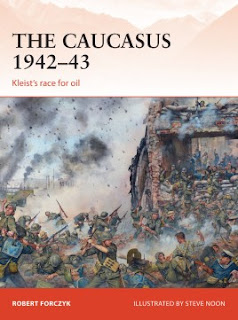 Germany faced a number of strategic options for its 1942 offensive on the Eastern front. The generals favoured another go at Moscow, but Hitler understood the economic imperative to capture oilfields to keep the economy and his army going. It's one of the ironies of WW2 that Hitler's invasion of the USSR was only possible because of oil stocks sourced from the USSR.

Oil in the USSR meant a swing to the south and the Caucasus. A decision reinforced by the allied occupation of Iran, creating a vital supply line of US and British war material to the USSR. The German plan was to protect the flanks with a subsidiary offensive towards the Don River and Stalingrad, while Army Group A commanded by List attacked the Caucasus. The spearhead of the attack was 1. Panzerarmee commanded by von Kleist.

The Russians, commanded by the old civil war cavalry commander Budyonny, had a patchwork of units, many hugely understrength, with limited tanks. He would fight a largely defensive campaign, cut off from the main supply lines to the north.

The German attack fell far short of the planned blitzkrieg, with too many targets and key units were withdrawn before the campaign was completed. They took most of the North Caucasus, but the campaign ground to a halt in the mountains. More importantly, the damage to the few oil wells the German's captured meant very little oil was made available.

The book is in the normal Osprey campaign format. Pen pictures of the commanders, the opposing forces and an Orbat. This is followed by a narrative of the campaign with excellent maps and lavishly illustrated. The colour plates by Steve Noon are particularly good.

For wargamers this is a very interesting campaign. The North Caucasus is largely plain, albeit with many rivers that the German engineers had to find ways across. Railway lines were important for supply. Then the mountains, which are some of the highest in Europe, a huge challenge even for the Gebirgsjager and their Romanian counterparts.

Troop types are also very varied. Tanks are mostly early war types, largely PkwIII for the Germans. Mostly T26 light tanks for the Russian's, supplemented by Lend Lease. The M3, Valentine and Matilda tanks made up nearly half the Russian tank strength.

German forces relied heavily on combined arms battlegroups that work well on the tabletop. Two mountain divisions as well a Romanian mountain troops and cavalry. They also made extensive use of Brandenburger's for infiltration and raiding - often working with local Chechen insurgents. There was air and naval support, but this became patchy later in the campaign as units were redeployed northwards.

The Russians have lots of interesting units as well. Armoured trains, cavalry and naval rifle brigades, supplement the traditional rifle divisions and NKVD security units. They also had patchy support from naval and air forces.

Overall, this is an interesting campaign with the opportunity to use a variety of equipment and troop types in contrasting terrain. This book is an excellent starting point.