My latest fiction read has been The Serpent Sword by Matthew Harffy - the first in his Bernicia Chronicles.

The setting is Dark Ages Bernicia, an Anglo-Saxon kingdom that roughly covered Northumbria and south-west Scotland in the 6th and 7th centuries, before it merged with its southern neighbour Deira to become Northumbria. 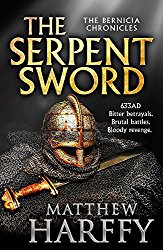 Our hero is Beobrand, a young farmer who follows his warrior brother to Bernicia, only to find he has been murdered. With some minimal training, he joins the army of King Edwin, only to be present at the disastrous defeat at Hatfield Chase, to Cadwallon of Gwynedd. Escaping the battle, his wounds are patched up at a monastery, before he joins a small group of warriors who roam the countryside.

He then leaves the group and joins the army of the new king, Edwin. I won't spoil the outcome, which as you would expect ends with not one, but two, climatic battles. There is a sub-plot regarding his brother's murderer and a bit of romance as well.

This is everything you would expect from historical fiction. It's very much in the Cornwell mode and has some similarities with the Kingdom series, although earlier in time. We even revisit Bebbanburg.

I found the earlier parts of the book a little slow going, but by the end it was hard to put down. There are four more in the series so far and are very reasonably priced on the Kindle. I have the next one downloaded already.

For the wargamer, the battles are small scale, best suited to large skirmish rules like Saga, or the adaptations of Lion Rampant.