Happy New Year! May your dice always roll six (except when that’s a blunder!) and your paint pots never run dry this year.

I have been making valiant efforts to reduce my lead/plastic pile in recent months, so I am resisting the temptation to start too many new projects. I have now painted most of the character figures from the Conan game, but that still leaves lots to go. I also have some unfinished projects that are more difficult to get enthusiastic about. Some Federale horse for Pancho Villa, Japanese and Russians for the Mongolian campaign and a few other bits and pieces.

My main new project for 2017 is going to be the 1848 Hungarian revolution, using the excellent Steve Barber figures. The infantry are ready to go and hopefully the range will add artillery and cavalry in due course.

I am tripping over rule sets, after the plethora of new publications in 2016. I can see me using Pikeman’s Lament when it comes out in January and I hope Pendragon get around to doing the long awaited update to Blitzkrieg and Corps Commander rules this year. I’ll have a look at Swordpoint, but I am happy enough with Hail Caesar and Lion Rampant.

I do like an anniversary for inspiration for projects.

0bviously WW1 centenaries continue into 1917. The Western Front battles of Vimy Ridge, Messines and Passchendaele will get a lot of coverage. There is also the Middle East with the battles for Gaza and the fall of Jerusalem – dust down The Lighthorsemen film! Then we have the Russian revolutions, February and October versions.

The Macedonian front was relatively quiet in 1917. The year started with battles at Doiran, then Greece joined the war in July and the year ended with operations in the Struma Valley to establish a winter line on the river. Politically, the Corfu Declaration enabled the establishment of Yugoslavia and there was the Great Fire in Salonika.

150 years ago in 1867 the Austro-Hungarian Empire was established and Garibaldi’s troops marched into Rome. I recently dusted down my Italian troops of the period, so I might give that a go.

This is the 300th anniversary of San Martin’s crossing of the Andes in 1817 and subsequent battles in Chile and Peru. We did this as a series of display games in 2007, so I have all the figures for this in 28mm. The anniversary will be a good excuse to dust this collection down and try out the battles with a new generation of rules.

The Third Anglo-Maratha War also broke out in 1817. I have some suitable figures for this after my Moghul and Plassey projects, so again an interesting period that thankfully doesn’t require extra painting.

Back another 100 years and we have Prince Eugene capturing Belgrade in 1717. I have all the figures we need for that after doing this battle in 2006 display games. This is a good excuse never to get rid of figures! There was also a major Tartar invasion of Transylvania in 1717.

1517 will probably be best remembered for Luther’s 95 Theses, which formed the basis of the protestant reformation. It was also the year that the Ottoman’s ended the Mamluk Sultanate.

Back into medieval times we have the Barons War, Battle of Lincoln in 1217. There have been several good books on this neglected period recently. However, of much greater interest to me is the elevation of Stefan Nemanjić to be first King of the Serbian lands. In 1117 there were a series of battles between the Hungary and Venice for control of the northern Dalmatian coast. Sources are limited for this, but it does have skirmish game appeal.

In 917, Tsar Simeon of Bulgaria repulsed Byzantine invasions. There is an excellent podcast series on this period to get anyone interested. There was a better outcome for the Byzantines in 717 when they repulsed the Arab siege of Constantinople. 100 years earlier in 617 they bought off the Sassanid threat to the City and efforts by the Avars later in the year.

Finally, my first wargame army was the Carthaginians. This year is the anniversary of Hannibal’s victory over the Romans in 217BC at Lake Trasimene and the subsequent Fabian strategy deployed by the Romans while he rampaged throughout Italy. If you have successor armies, 100 years earlier they battled for control of Macedon after Alexander’s death.

So, plenty of inspiration in this year’s anniversaries. Thankfully, few require the collection of new armies, although I am sure wicked figure manufacturers will do there very best to tempt us all! 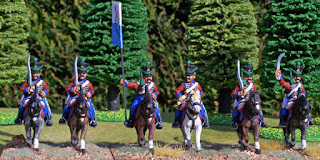