After Dunkirk: Churchill's Sacrifice of the Highland Division

This is the updated edition of Saul David's first book, covering the actions of the 51st Highland Division in the France 1940 campaign.

The 51st Highland Division wasn't with the rest of the British Expeditionary Force when the German's launched their Blitzkrieg attack in May 1940. They were part of the Maginot Line forces and as such had to retreat around Paris towards the coast. This meant they were still part of the defence of France, indeed part of a French army corps, after the Dunkirk evacuation. 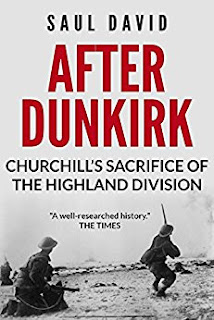 The Highland Division fought on the old WW1 battlefield of the Somme and then retreated over the River Bresle. The divisional commander, General Fortune, recognised that his Division was outnumbered and outgunned even with some limited armoured support from the under strength 1st Armoured Division. There was virtually no support from the RAF, as squadrons regrouped after Dunkirk in readiness for the Battle of Britain.

The French army was in complete disarray, and for a while Fortune was the effective corps commander. Many French units simply abandoned the fight and along with refugees, and this added to the division's problems.
The only sensible military option for the Highland Division was evacuation, and there was a brief window of opportunity to use Le Havre. However, Fortune was ordered to continue fighting. Later Dieppe was a possibility, but Fortune was misinformed about the state of the port. In the end, the division was boxed into St Valery, an entirely unsuitable harbour for evacuating 10,000 British troops and similar numbers of French. When Rommel managed to seize the cliffs above the village, the game was up and the division surrendered. 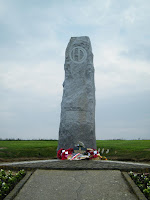 Churchill had hoped the presence of the Highland Division would stiffen the military resistance of the French. It is doubtful if that was possible, but it is fair conclusion that the division was sacrificed for this wider strategic objective.
The book's epilogue describes the fate of most prisoners of war and the exploits of those who tried to escape. It was the reformed 51st Highland Division that liberated St Valery in 1944.
The book covers the strategic story, but the focus is on the division itself. It is a detail description of the many actions, often down to unit level. From a wargamers perspective, it provides a good understanding of how the British army of the period operated, particularly during a fighting retreat. At times the division was holding huge lengths of the line, which meant little more than isolated strongpoints, based on buildings and woods. The division also had a mix of regular and territorial battalions, which adds another factor to the operational decisions.
For the wargame, I choose a fighting retreat scenario, using Bolt Action rules. The 1940 campaign is understandably little gamed, particularly using Bolt Action. The tournament players are desperate to get ever bigger kit onto the table! Hopefully the new supplement on Operation Sealion, will help increase interest in this period. If you want a lighter read than this book, I would recommend Andy Johnson's fictional account of the campaign, 'Thunder in May'. 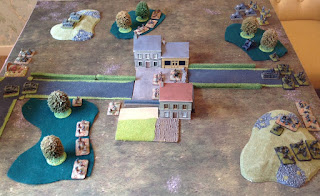 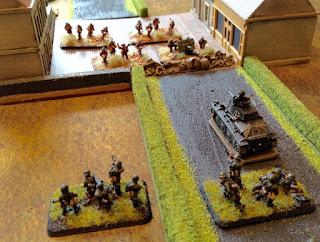