I have clearly been watching too many Netflix boxed sets recently. The Borgias and Medici: Masters of Florence cover the period of the Italian Wars. Even if the history is largely a backdrop to the sex, murder and intrigue of these lavish productions. My recent visit to Italy added to my interest in the period, with some very fine castles. 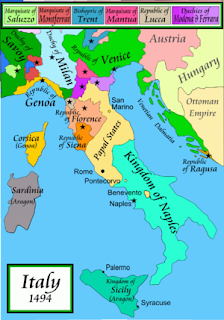 The Italian Wars refer to a period of some 65 years, from 1494 to 1559, that saw eight different conflicts on the Italian peninsular. Italy was a patchwork of states, often warring amongst themselves.

These conflicts went up a notch when the great powers of the period involved themselves. Firstly the French, who marched through Italy to capture Naples, before being forced into a fighting withdrawal. French involvement encouraged the Spanish to support Naples. Later the Holy Roman Emperor became involved in northern Italy. Even the Ottoman Empire dabbled in the conflict and Henry VIII got involved on the fringes.

The armies the period were in transition from the medieval to the renaissance. The fully armoured knight was still dominant, but became less effective as the pike replaced the spear and the arquebus replaced the crossbow. All armies made extensive use artillery, in the field and in siege warfare.

Mercenaries played an important role in most armies. Infamously, the Swiss and the German Landsknechts. The Italian states relied heavily on the Condottieri contractors, who singularly failed to adapt to the new methods of warfare.

For the wargamer, the Italian Wars offer a glorious mix of troop types and colourful armies. I have a limited number of figures in 28mm and 15mm, suitable for the period. As a toe in the water, I have started with my current favourite set of rules, Pikeman's Lament. They are designed for a slightly later period, but easily adapted.

My first action was an Italian state against an Imperial force, 24 points a side. Using 15mm figures.

Some photos of the first game, there will be more. 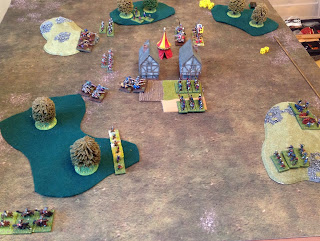 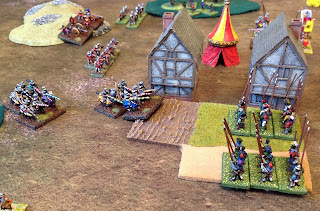 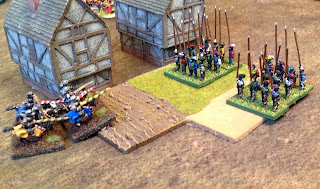 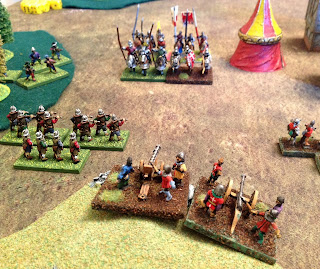