A Song of Ice & Fire

Well it has arrived! Late, but not as bad as some Kickstarters I can think of. I refer of course to the Game of Thrones tabletop miniatures game - 'A Song of Ice and Fire'.

The starter set comes with the slim rulebook, cards, tokens and measurement sticks for the game. I bought this primarily for the figures, but the rules look pretty straightforward and interesting, so I will give them a go.

The starter set gives you enough figures for a small battle game between House Lannister and House Stark. The main characters plus four units on each side.


I also bought some extra character figures for both houses and some neutral figures. These are based on the books, not the TV series, for obvious licensing price reasons.

Not forgetting the Lannister knights.

And the Stark bowmen.

I thought some other factions might come in handy and the House Bolton figures looked great. Here are the Flayed men and the Bastard Girls. 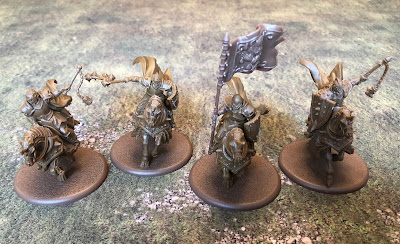 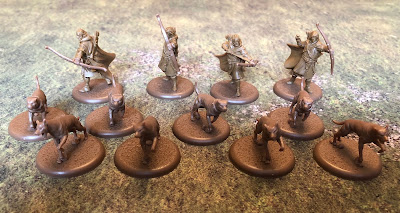 I have been playing Game of Thrones using Lion Rampant for some time, as you can see from earlier posts with this tag. I converted the figures from a number of ranges as well as using a couple of Dark Sword character figures. This photo shows a size comparison with my converted Lord of the Rings figures and some Front Rank English archers. The figures in the game are taller, but not as chunky as most 28mm figures. They are hard plastic and come as one piece holds, not assembly required. And very good they are too. 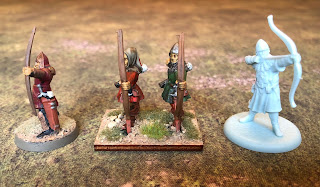 Finally, if you are going to the Claymore show in Edinburgh next Saturday, you can try your hand with House Lannister. The GDWS participation game will be using my figures. Even an outside chance that I might paint a few of the new ones.
Posted by Balkandave at 17:53