The starter set for Warlord's latest game, Cruel Seas, arrived last week. Painting is pretty straightforward, grey with some highlights and a wash, and it's off to the tabletop.

The starter set comes with 6 British Vosper MTBs (Type 1 and 2) and 4 S-Boats (38 and 100 class). Plus a U-Boat as an extra for pre-orders. The ships in the box are plastic and go together well, even some basic instructions and a painting guide - pretty rare for Warlord! They are 1/300 scale, which is useful if you want to extend the game to landing parties and of course aircraft.

You also get all the counters and game aids you will need, including the activation and playing dice. There is a glossy paper playmat, but I used my Deep Cut version.

The rulebook is a lovely piece of work. The basic and advanced rules, together with some scenarios, fleet lists and a potted history of small boat warfare in WW2. The starter pack is British and German, but Warlord clearly plans to include all the main combatants.

So how did it play? In short, this is a very good game.

I somewhat ambitiously decided to use all the models. The scenario also used the U-Boat, which has beached by one of the islands and the S-Boat flotilla is tasked with rescuing the crew.

Each ship has a card with the key stats, weapons, speed etc. on which you keep a track of damage points and critical hits. Each ship also has a template that marks the current speed and helps with the angle of turn. 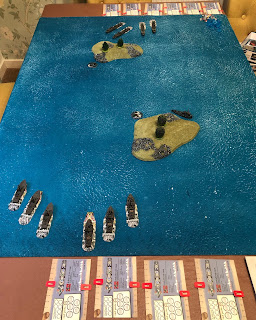 After the first turn, two S-Boats are making for the U-Boat. The blue splash markers are for near misses - they give a fire bonus if you get three of them. Long range fire isn't very effective. 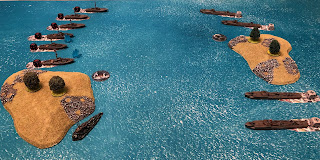 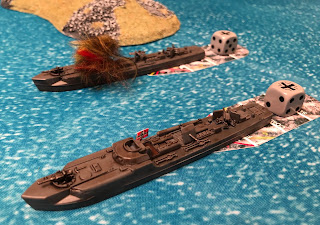 The British MTBs are smaller and less resilient as well as under gunned. Torpedoes are only effective against larger and slower ships. Firing uses a D10 for hits and one or more D6 for damage. A six is a critical hit, which if you don't roll a save, can have a range of effects on your next turn. 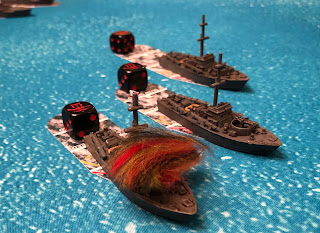 It's starting to get crowded in the main channel and this shows how sailing is very different from a land battle. You can't just stop and start. You can go up and down only one speed and turning is slow and limited. 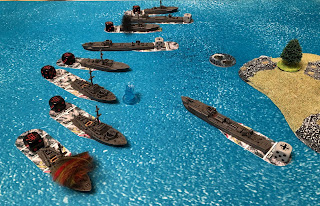 Something I learned the hard way. A rudder hit meant this MTB couldn't turn and so collided with another MTB and sank. The other one was badly damaged, so that's a third of the force out of action! 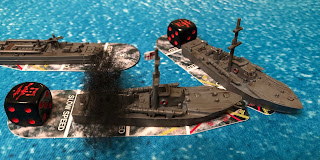 The Brits did sink one S-Boat as it was about to rescue the U-Boat crew. 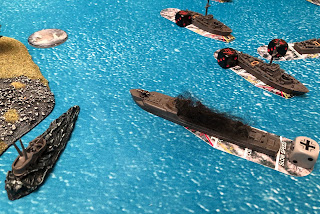 But, the S-Boats in the north came back down the channel and that was curtains for the remaining  MTBs. 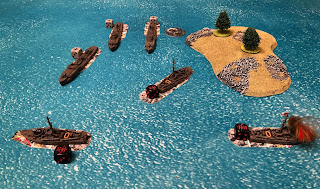 Overall, the rule mechanisms are pretty straightforward but require more than a bit of application to master this type of warfare. There are rules to cover air attacks, mines, depth charges, smoke, radar and lots more.

A very good set of rules, I will be playing this again. I have already dusted down my copy of Brooks Richards' 'Secret Flotillas', which covers operations in the Adriatic. An excuse to model my favourite Adriatic island, Vis. The Aegean is another interesting possibility. 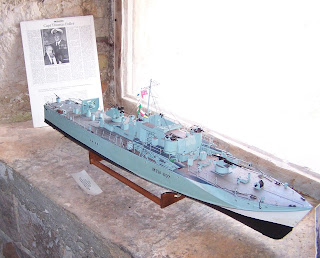 Models of the small boats based at Vis in a local museum. 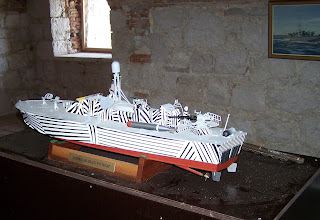