No Friends but the Mountains

The sub-title for this book is "The Tragic History of the Kurds' - very apt as this is indeed a tragic history. I suspect like most people my understanding of the Kurds is limited to recent events and their conflict with Daesh and then Turkey, so I was pleased to pick up this book by John Bulloch and Harvey Morris, written in the 1990's, to understand more. 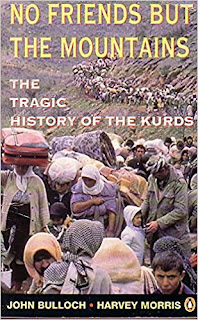 The Kurds are possibly the largest ethnic group not to have their own state. They are divided across Iraq, Iran, Turkey, Syria and Armenia, with a population of between 15 and 25 million. The core territory is in the Taurus and Zagros mountain ranges that have formed a natural barrier and very often a refuge from neighbouring states. 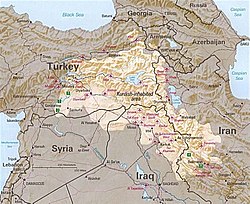 The Kurds have their own language, although written Kurdish is underdeveloped. Differences of dialect and religion, combined with tribal rivalries ensured that they remained divided for most of their history.  These rivalries have been exploited by the host countries who have generally kept their Kurdish provinces underdeveloped, often resorting to oppression on a horrendous scale.

There have been identifiable Kurdish people for up to four millennia, with the first historical reference appearing in Xenophon's 'Anabasis'. They are probably descended from the Medes, but as always the racial mix will be more complex. Most, but not all Kurds adopted Islam, albeit slowly. The most famous Kurd is probably Salah al-Din Yusef (Saladin), who became Sultan of the Abbuyid Dynasty.

During the long period of Ottoman rule the Kurds were important border lords against Persia. Some 500,000 men were armed and they manned 776 fortresses. As the Ottoman Empire declined there were revolts against Turkish rule and so began a long series of wars, during which outside powers encouraged and then abandoned the Kurds. A sadly familiar story throughout the 20th Century to the present day.

The struggle against Saddam Hussein is extensively covered and the particularly shocking gas attack at Halabja. It killed at least 3,000 people, mostly women and children, and resulted in yet another exodus. The long standing Turkish oppression of the Kurds is objectively covered, a process that is very much in play today.

While Kurdish history is indeed tragic, lack of unity has all to often been their undoing. There may be some modern optimism on this point and the Kurdish diaspora has helped to promote their cause. I have met a number of members of this community in Scotland and they have generally avoided the Palestinian model of direct action.