Armies of Russia's War in Ukraine

The latest in the Osprey Elite series is Mark Galeotti's study of the armed forces engaged in the conflict in the Eastern Ukraine and the Donbas region in particular. 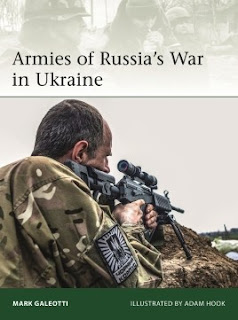 The conflict started in March 2014 when the Russians occupied the Crimea. This is a largely ethnic Russian area, controversially transferred to Ukraine in the Soviet period, and they played to significant local discontent with Ukraine.

The takeover was achieved with very little difficulty and this encouraged the Russians to try a similar action in the Donbas region. The aim here was not to incorporate the region into Russia, but rather to destabilise Ukraine and pressure them to stay in the Russian sphere of influence. This has been a singular failure and the Russians have been drawn into an expensive long term conflict that shows no sign of a resolution.

The main chapters cover the main armed groups. The Rebels and Russian regular forces are in the main organised into Battalion Tactical Groups that are heavy on support weapons. Regular Russian artillery has been particularly effective in supporting these units. Drones are used as artillery spotters, but the Russian air force has not deployed in significant numbers. Partly because Ukraine has modern SAM capability as well as allowing Moscow to maintain the fiction that this is simply a local rebellion. Some 42,000 Russian troops were rotated through the region in 2014, a very significant commitment for the volunteer elements of the Russian army. Conscripts can only serve if they volunteer, as no war has been formally declared.

The Ukrainian forces are split between militias and the regular forces. The militias were largely crowdfunded and include some neo-Nazi elements, although most of these have now been incorporated into the National Guard. Regular forces still reflect their Soviet legacy, but have been reorganised and are starting to be re-equipped with western weapons and kit.

The irony is that neither side really wants the Donbas. It is war ravaged and awash with weapons and criminal elements. However, neither side can abandon it for political reasons.

This is a useful book for wargamers with organisational tables and equipment lists as well as colour plates for the primary units. The militias come in a variety of uniforms and generic east European models are available in most scales. My modern Russians in 20mm will work well for this conflict. 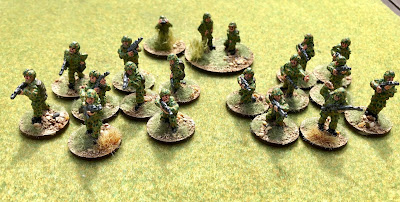