My summer holiday reading has been Ben Macintyre's book, 'Operation Mincemeat' - a deception plan to convince the Germans that Sicily was not the real invasion plan in July 1943. 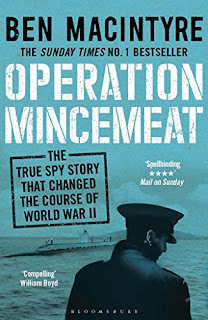 In essence, they took a dead body, created a military persona for him and dropped the body off the Spanish coast with a private letter between two senior British generals for the Germans to find. The basic story is told in the 1956 film 'The Man Who Never Was' The book provides much more detail, not only about the deception itself but also how the letters reached the Germans and how the upper echelons of the Nazi hierarchy, including Hitler, handled the information.

My primary interest in this story is the part it played in the wider Operation Barclay, which aimed to convince the Germans that the allies planned to invade Greece and Sardinia as a jumping off ground for an invasion of Europe through the Balkans and Southern France. Churchill was a big fan of attacking Europe through the 'soft underbelly' and Hitler, remembering the Salonika Campaign of WW1, expected such a move. Unlike his generals, he was focused on the consequences of losing most of his oil and other war raw materials, which came from the Balkans.

The plan was to use the fictitious 12th Army commanded by General Henry Wilson to attack Crete and the Peloponnese. The 5th Division would attack Cape Araxos, while the 56th Division would capture the major port city of Kalamata in the western Peloponnese. This would draw units away from Sicily and spread resources across a broad front. It would also help the Russians, who were preparing for the Kursk battle.

The deception plan was very challenging because the Germans rightly thought Sicily was the most likely target. They also expected a deception operation. As one intelligence historian put it, "It is very unusual and very difficult for deception to create new concepts for an enemy. It is much easier and more effective to reinforce those which already exist."

The 12th Army assembled at Cyrenaica in Libya had an array of dummy landing craft, gliders and tanks as well as actual AA batteries and fighter cover. Greek troops practised amphibious landings in Egypt, along with a call for Greek speakers, leaflets on 'hygiene in the Balkans' and much more. Nearer the time in July, Operation Waterfall, stepped up its operations including landings on the Greek coast and real sabotage operations by the Greek resistance, codenamed 'Animals'.

The principal German intelligence analyst was Baron Von Roenne. Hitler trusted his judgement without knowing that he was a committed anti-Nazi, later executed for his role in the Stauffenberg plot. We will never know if he deliberately ignored the several inconsistencies in the Operation Mincemeat deception, but it seems likely. Either way, once Hitler accepted the evidence, the rest of the hierarchy went along. Ultra and other intercepts confirmed that the Germans expected landings in the East and West Mediterranean, with a dummy attack on Sicily.

The Germans shifted the 1st Panzer Division from France to the Peloponnese. This was a recently reequipped division with 83 tanks and veteran troops. They were being moved across Europe to counter an illusion. More importantly, they were not in Sicily, which had only two German divisions and limited supplies. At the critical moment of the Kursk battle in July, two more panzer divisions were placed on alert to go to the Balkans. Torpedo boat squadrons were shifted to the Aegean, new shore batteries installed along with minefields. The total number of German divisions in the Balkans was increased from 8 to 18, while in Greece they increased from one to eight.

Very few wartime deception operations have been as successful as Operation Mincemeat. This book has the benefit of access to most of the materials and is not constrained by the secrecy requirements imposed on the earlier authors. It is also a story of how a small group of British intelligence officers battled their hierarchy to get the plan operational and how the Germans bought it.
Posted by Balkandave at 11:09