My bedtime reading for the last two weeks has been the latest in Matthew Harffy's Bernica Chronicles, 'Storm of Steel'. 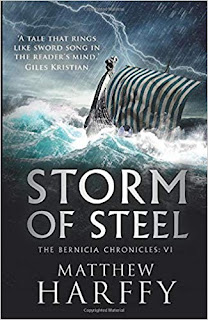 This series is set in 7th century Britain. The Romans have gone, the Saxons are raiding and Britain, along with most of Western Europe, is split into small states. This is historical fiction in the Bernard Cornwell style, in which our hero, Beobrand is a minor lord in Northumbria.

In something of a departure, this book takes place largely at sea and far from Northumbria. Beobrand is tasked with escorting the Northumbrian king's new bride from Cantware (modern Kent). He fights off Saxon pirates en-route and meets up with the new Queen and old friends and enemies. He discovers that he has a daughter from a one night stand (I do like flawed heroes!) who has been sold by her 'father' to the very same Saxon pirates - led by Grimr Kamban. Great name, liberated from a Faroe Islands saga.

They are taking her to a Frankish lord in Rodomo (Rouen), who has a taste for young virgins. Sex trafficking is a huge problem today with about two million children exploited every year. However, as the author points out in his historical note, it was likely to be just as great in the Dark Ages, without any legislation and with slavery being a common practice.

Our hero decides to chase after the pirates and rescue his daughter. I won't spoil the story, but there are epic sea journeys and many battles in the finest tradition of this genre.

I have enjoyed all Matthew Harffy's books and this is no exception. This is a good period for historical fiction author's as the historical sources are scarce. However, he has clearly done some serious research to create a credible setting. Most importantly, it is a cracking read!

The pirate captain has a distinctive helmet, which reminded me of my visit to see this much more sophisticated version in the British Museum, part of the Sutton Hoo treasures. 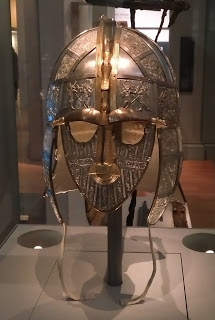 And let's have some Saxon wargames figures, albeit slightly later warriors from my 28mm army. 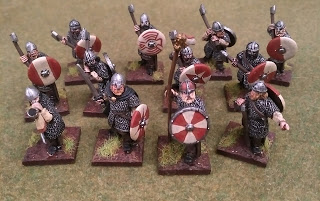