This is Albert Lulushi's history of OSS raids behind enemy lines in WW2 with a focus on the operational Groups Command in the Meditteranean theatre of operations. 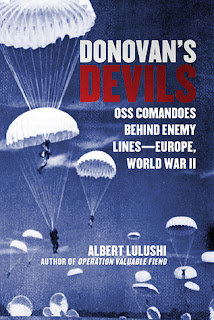 The Office of Strategic Services was established before the USA entered WW2. Not without difficulty given the strength of the isolationist lobby. It was the brainchild of William Donovan, its founder and director and was the precursor of the modern-day CIA. Its job was not just to collect intelligence, it also organised operational groups (OGs), which operated behind enemy lines, typically with resistance groups. The British equivalent was SOE.

In the Mediterranean theatre, the focus was on Italy. Aided by the many Italian speaking Americans that OSS recruited. The book describes a wide range of operations in support of the Italian campaign. After the Italian armistice, they worked with the resistance groups operating behind the German lines.

My main interest was in the chapters covering operations in the Balkans. While this was primarily a British franchise, OSS again recruited many US immigrants from the region. Company C was created in fall 1943 with OGs destined for the Balkans, and the first for Yugoslavia arrived in October 1943. The island of Vis, off the Dalmatian coast, became their main base of operations. This was a major supply base for the Yugoslav partisans, and over two hundred Yugoslavian OGs became part of the Allied garrison on the island.

Later Yugoslavian operations included rescuing US airmen who bailed out after raids on Romania. Most of these landed in partisan areas and were quickly moved to the Adriatic coast and back to Italy. Operation Halyard rescued over 500 airmen from Chetnik controlled areas, particularly tricky as the Allies had switched support from them to the partisans. Another high profile mission rescued American nurses from Albania.

A Greek OG unit was formed in the summer of 1943, after an OSS recruiting team visited Camp Carson, Colorado, seeking personnel who spoke Greek. So many of the 122nd Infantry Battalion volunteered for duty that its commanding officer offered the entire battalion. A total of 18 officers and 172 enlisted men went through the OG training curriculum, and the first group of twenty-three landed by boat on the western coast of Greece on April 23, 1944. By the time the Greek OGs withdrew in November 1944, their accomplishments had included fourteen trains ambushed, fifteen bridges blown, sixty-one trucks destroyed, six miles of railroad lines blown, 349 confirmed enemy killed, and almost 1,800 estimated killed or wounded.

OSS recruited some interesting operatives. For example, the mission of convincing the Italian garrison in Sardinia to lay down their arms was entrusted to Lieutenant Colonel Serge Obolensky who was a former Russian prince and Czarist officer. The OSS also played an important role in bringing war criminals to justice after the war.

Some of the actual operations described in this book would not be out of place in historical fiction. They are told clearly using official record and other resources. Well worth a read.