Zooming with Rommel in Thrace

This week's Zoom game used Sam Mustafa's Rommel to play an Operation Gertrud scenario. With German panzer divisions storming into Thrace, the Turkish army sends it armoured brigades forward while strengthening the Catalca lines, the last line of defence before Istanbul. At the bottom of the table, Gebirgsjager push through the hills while Turkish infantry fight a delaying action. 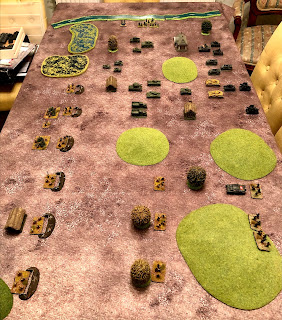 Turkish armour at this stage of the war is almost as good as the Germans. However, training and experience were poor in comparison. This makes the game pretty similar to the France 1940 campaign.
The result was similar as well, with the Turkish armour largely destroyed in a few moves. Here Pkw IVs attack a Turkish battalion equipped with Valentine and Stuart tanks. 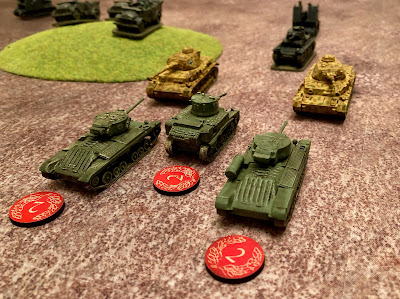 The Turks did better in the hills, even when the Germans supported the attack with Stug IIIs. 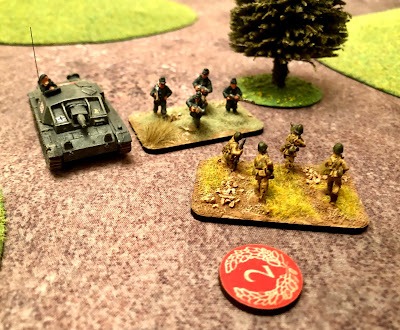 Finally, the Germans reached the prepared defensive positions of the Catalca lines. These lines held out in 1912 against the Bulgarians and created a few challenges for the Germans because they cant be outflanked. However, by concentrating on one spot the Germans broke through, at some cost, and it was game over. German troops will be enjoying some Su Böreği washed down with Raki in Istanbul tonight! 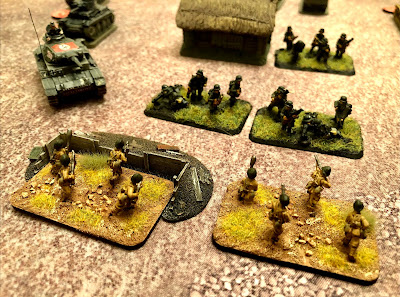 Games like Rommel, which use battle boards are not the easiest to use over Zoom. Dice based games are better and you can use the dice apps on your phone or iPad - keep it simple is the golden rule.
My painting mojo is slowly returning. Made a start on the 28mm WW2 Turkish forces for Bolt Action. These are the first infantry. The figures are Romanian infantry from the Great Escape Games range. The cap is very similar to the Turkish one and a bit of file work elsewhere gives a reasonable representation. I have decided to paint the 28mm figures in the winter uniform, as a variation on the 15mm figures above. 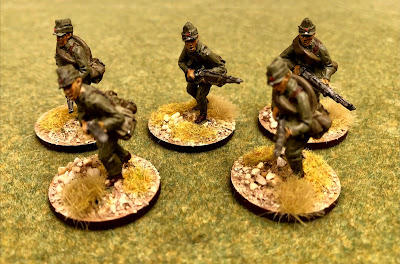