The Politics of Turkish Democracy and Operation Gertrud for Rommel

OK, this may appear a bit left field for this blog. Still, this book by John VanderLippe does have quite a bit on the Turkish military in WW2 (my main current research interest), and the essential economic and political background to the decisions made. The subtitle is 'Ismet Inönü and the Formation of the Multi-Party System, 1938-1950', which gives an indication of the time period but isn't very helpful otherwise. Not least because few would describe the Turkish state during this period as multi-party in the western democratic sense. It was essentially a one-party state and reforms were at best a modest step along the road.

President Inönü was the successor to Atatürk who died in 1938. He was also an Ottoman officer who served with Atatürk in WW1 and commanded on the western front during the Greek-Turkish War 1919-22. The two important battles of Inönü were named after him. His election to the presidency was not uncontested, although, in the end, it was overwhelming. The key issues during this period were developing the country, expanding or limiting the role of the military, beneficial relations with the Western Powers, and defining nation and community. He described foreign affairs as his first duty.
In military terms, Turkey's links to Germany continued after WW1. Many officers were trained in the German staffed Ottoman War Academy, and others, including Inönü, served with German officers during the war. Doctrine remained heavily influenced by German thinking and personal friendships developed through study in Germany during the 1930s. Germany was also a major economic partner with over 2000 German advisors living in Turkey before the war broke out in 1939. In 1935, 49% of Turkish exports and 38% of imports were with Germany. In contrast, Britain took only 3% of Turkish exports and supplied 11% of imports. Had it not been for Italy's role in the Axis, it might have been challenging to reorientate Turkish foreign policy during WW2.
There is a useful section in the book on Turkish military preparedness for the war. Turkey lacked modern weaponry, and the soldier's diet appeared to be almost entirely based on bulgur wheat! They also had almost no domestic supply of oil. Army manoeuvres in August 1939 convinced Inönü that Turkey was not ready for war. He responded by developing a war economy through the National Defense Law of 1940, which focused production on defence needs and clamped down on political expression. It became increasingly unpopular, not least because of basic commodity shortages, but remained in place until the 1960s. The percentage of the budget spent on defence increased from 30% in 1938 to 51% in 1944, maintaining a million men in the armed forces.
Despite these preparations, the foreign policy aimed at keeping Turkey out of the war for as long as possible. Turkey only declared war in February 1945, just in time to get a seat at the table and fend off Soviets, which was always their primary concern. Edward Weisband's book covers these developments well.
I have been trying out Sam Mustafa's Rommel rules this week for an Operation Gertrud mid-war game. These rules attempt to create grand tactical WW2 scenarios. This one is a condensed Thrace scenario with Turkish armour attempting to at least slow down the panzers coming from Bulgaria and a Fallschirmjager attack over the River Maritsa. The Turkish infantry wait behind the fortifications of the Catalca lines, which defended Istanbul. I have had a first go at army lists and an OPs board for Rommel, which you can download from Balkan Military History here. 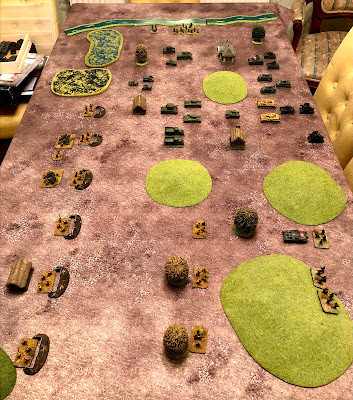