This is the latest in my chronological re-read of Nigel Tranter's novels covering the history of Scotland.  This book is about David I, who ruled from 1124 to 1153. David is not as well remembered as some of the later medieval monarchs, perhaps because he doesn't fit into the modern nationalist view of history. Nevertheless, Tranter was clearly a fan, as this is a very sympathetic history of him. 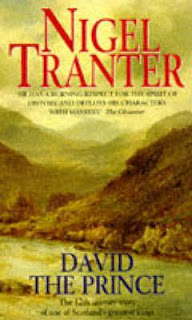 David was born in 1084, probably the eighth son of King Malcolm III and the sixth and youngest borne by Malcolm's second wife, the blessed Margaret. As such, he had no expectations of becoming King and spent much of his youth in the English court of Henry I, who married his sister Matilda. As a brother in law to the King, David prospered and was granted the Earldom of Huntingdon after he married another Matilda, the former Earl's widow. Matilda appears to have been a popular name choice, as there are confusingly many of them in this story!

He was also appointed Prince of the Cumbrians, probably after Henry pressured his brother, the Scots King Alexander. This has little to do with the modern region of NW England, although it certainly included Carlisle.  It covered most of southern Scotland, and David used the revenues from Huntingdon to build abbeys and castles in the Norman style.

When Alexander died without an heir in 1124, David was the last surviving brother. Life could be very short in medieval Scotland! However, the Scots had no tradition of primogeniture, so his election was far from certain. Tranter portrays his accession as reasonably smooth, but historians of the period point to considerable opposition, particularly in the North. The backing from Henry and the threat of an English army was the decisive factor. In practice, David only ruled in the south for the early years until a revolt by the northern earls was defeated at Stracathro in 1130. Then, with the help of the Norman knights he had brought to Scotland and military aid from Henry, he pacified the rest of Scotland. The Normans who came to Scotland included families who would later make their mark on Scottish history, including Bruce, Balliol and Stewart, anglicised from their French names.

David is best known as an administrative reformer, introducing the parish system that partially survives to this day, burghs and the feudal system. It is this following of English practice, imposed with Anglo-Norman cash and swords, which makes David problematic for nationalist history.

After Henry's death, relations with England reverted to more normal hostility. David had backed Henry's daughter, another Matilda, for the throne. However, Stephen had usurped the throne, and civil war in England allowed David to assert Scottish rule over Northumbria. Despite losing the Battle of the Standard, he still managed to reach an agreement on holding these lands in the name of his son. He died in 1153 with the borders of Scotland at their largest, although they didn't survive long after his death.

For further reading, I would recommend the very readable Richard Oram's David: The King Who Made Scotland. My copy is the 2008 edition, but I notice there is a 2020 edition.

On to the tabletop for a game of To the Strongest! The armies of the period are interesting, with the Scots having a couple of units of Norman knights alongside the usual massed ranks of spearmen. The Anglo-Norman army is quite different from the typical feudal English armies. The Normans kept the Saxon fyrd, so you get shieldwall Saxons alongside Norman spearmen. The bows and crossbows are light units, so they don't dominate. In the Battle of the Standard, the Normans dismounted to fight, which was a rare experience.

The Anglo-Norman left-wing quickly defeated their opposite number and started to roll up the Scots right. 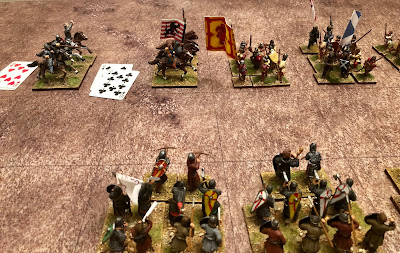 The Scots left got the better of their fight but not in time to save the centre. This was some melee, but it broke the Scots army. So Northumbria was won for the Anglo-Normans in this refight. 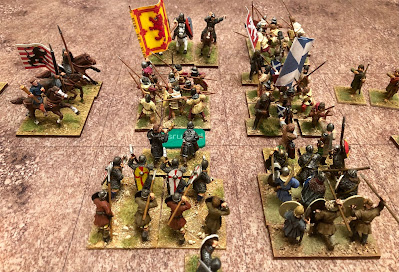