Our daughter returned home for most of the last week, which meant I was outvoted with the TV remote. The good news is that it forced me back to the painting table and caught up with History Hit shows and podcasts.
After I finished the Venetian galleons, it was back to the Cyprus 1974 project in 20mm. Having painted some armour, it was time to tackle the infantry. I now have two squads and a spotter team. The figures are from the Elhiem range, which look pretty tall for 20mm but are nice figures with only a little flash in the usual places. There are some compromises as obviously, no one does specific models for the Turks, so they are a mix of US army/marines and Vietnam figures.
One of the advantages of doing a modern army is the availability of colour photos. I trekked around Salute in search of the closest spray paint I could find and settled on a new firm to me, TTC, which have an impressive range of colours. Perhaps a little too dark, but there was a range of shades from the photos even before they hit the dusty ground. First, a primer followed by some block painting, including a darker shade of green for the webbing and the distinctive helmet covers. Then a brown ink wash, finishing with dry-brushing dark sand. 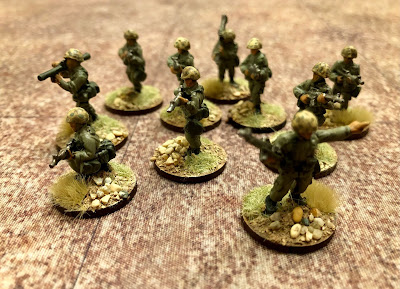 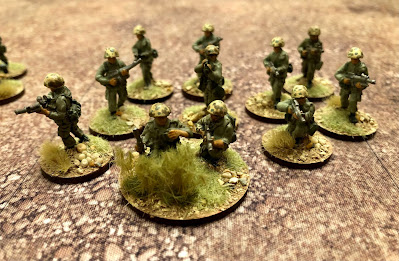 One of the reasons I use 20mm for moderns is the availability of ready built and painted models. These are from the Easy Model range. The downside is that they usually have the wrong decals for my obscure armies. That was the case with these M113s and the Huey. The plus side of having our daughter at home is that she has acetone nail varnish remover. This is terrific stuff that, with a bit of careful application with cotton buds, brings the decals off, although it stinks! The M113s needed a bit of conversion work to change them from the US version, but the overall effect is fine after some dry-brushing. Twenty M113s landed with the first wave of the amphibious assault on 20 July 1974, and many more in the second wave. 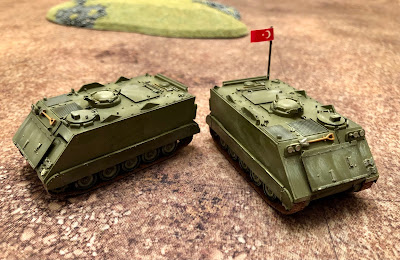 A key element of the Turkish plan was to use airborne troops to hold what was known as The Triangle. This was an area of Turkish villages north of Nicosia held by the local Turkish Cypriot militia (TMT). They parachuted in an Airborne Brigade and used helicopters to bring in three commando battalions and a battalion of infantry that was hurriedly trained in the role. To achieve this, just about every available helicopter in the Turkish Army and Air Force was brought together for the task. I helpfully had some roundels and transfers leftover from my WW2 project, after a liberal application of acetone. Thanks, daughter!
There aren't many books on the Turkish military in English at least, although I am collecting everything available. However, there are quite a few academic papers, which are very helpful. I have just finished reading a Masters thesis by Connor Murphy, 'Modernisation of the Turkish Navy' (2020). The focus is post-1974, but it shows how the Turkish Navy has shifted its strategy and procurement policies since the Cyprus operation and the subsequent arms embargo.
The traditional strategy of coastal defence is shifting towards what is called a 'Blue Homeland' policy. This envisages the navy operating across the Mediterranean, including Cyprus and Libya. Ships have also taken part in anti-piracy operations off the coast of Somalia and visited ports across the world. The navy now has a base in Qatar. Instead of relying on European and US shipbuilders, they now have the capacity to build corvettes, frigates and even destroyers. I can see a new naval project coming, although sourcing these ships is likely to be challenging!
Posted by Balkandave at 18:10