I watched the BBC drama series 'The Hour', which is set in a newsroom covering the Suez Crisis in 1956. My wife started to bombard me with questions about the events of that year, and I realised that my knowledge of the detail was limited. So, I have been reading David Charlwood's 'Suez Crisis 1965: End of Empire and the Reshaping of the Middle East', published by Pen and Sword. 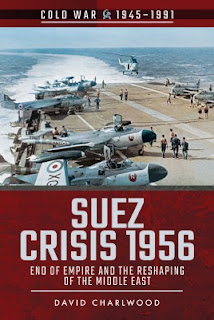 This is a concise overview of the crisis with an emphasis on political and diplomatic events. It isn't a detailed military history, although that would, in any case, be a reasonably short book. British and French troops had barely landed before a ceasefire was agreed, although the Israeli Sinai campaign took a little longer.

The story that most people will know is that Egyptian President Nasser nationalised the Suez Canal. The British and French took exception, even though the treaty end was not that far off. They made some diplomatic efforts to resolve the issue before colluding with Israel to invade. The US and the Soviet Union made different threats to force a withdrawal, and the British PM Anthony Eden had to give in. He resigned soon after. Ironically, allowing Macmillan to become PM, one of the initial hawks in the Cabinet.

The book flagged up some details I didn't know.

Nasser claimed that 120,000 Egyptians died building the canal, a figure that the author doesn't challenge. It is widely quoted (including the Building Safety Journal), but others are sceptical. It totals seven deaths a day, which doesn't sound that unlikely by the shocking standards of the mid-nineteenth century but is much higher than the company medical officer's record. Of course, he isn't an objective source, but the truth is probably somewhere in-between.

I understood the US opposition, but perhaps not just how furious Eisenhower was. He was facing an election, but he was also concerned not to be drawn into what he regarded as French and British imperialist policies. It was the US refusal to cover the loss of oil supplies and dollar reserves once the canal was blocked that forced the British to give in. The Russians were obviously interested in developing their Middle East influence, even if the moral high ground is somewhat challenging when you are invading Hungary simultaneously!

I hadn't appreciated the French linkage to the conflict in Algeria. They were convinced that Nasser was helping arm the liberation movement. It was the French who initiated the secret deal with the Israelis (Sevres Protocol), creating the casus belli for the intervention. Israel saw it as an opportunity to damage the growing Egyptian threat. Many thought the Israeli mobilisation targeted Jordan, which created an interesting problem for the British, who had a treaty obligation to support Jordan.

The political fallout between the western allies didn't end at Suez. When Harold Wilson refused to support the US over Vietnam, officials reminded the US of their response to Suez. It remains the greatest rift in the 'special relationship'.

Militarily, the campaign is not without interest. It was one of very few seriously contested amphibious landings since WW2. The Turkish intervention in Cyprus in 1974 is arguably the only other one. I have gamed the Sinai campaign in 10mm, but it was something of a walkover.

Overall, this is an excellent overview of the crisis, well written with plenty of illustrations.