My holiday bedtime fiction reading has been 'In Turkish Waters' by Charles Whiting. This is one of a series featuring Common Smith VC and his Motor Torpedo Boat, HMS Swordfish. I have read a couple of his non-fiction books, and the subject title appealed. 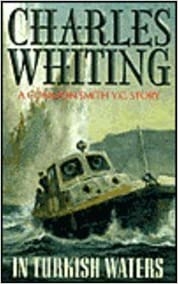 The setting is 1922, at the height of the Greco-Turkish War. Smith is given a clandestine mission to sink two ex-British and French battleships being repaired in Istanbul. The 'wicked' Ataturk plans to use them to sink Greek ships carrying refugees fleeing Smyrna. This is to avoid the international opprobrium of massacring them on land, although why it would be any more acceptable to kill them at sea is not made clear.

The Swordfish, suitably civilianised, makes its way from the Humber through French canals, then to Greece and Alexandria. Before sneaking past the Dardanelles forts to attack the ships in the harbour. En-route they are attacked by Germans, Bolsheviks, Turks, and anyone else, it seems.

I regret to say few works of fiction have irritated me more than this book. Not only is the historical premise absurd, but even for historical fiction, the action scenes are ridiculous. Then there is the characterisation. The British are cartoon characters, two public school officer types, a rugged hard-drinking Scot and various working-class stereotypes. Their opponents are equally cartoonish, including the Bolshevik agents.

But the most egregious characterisation is of the Turks and Kemal Ataturk in particular. The description of him is an offensive, racist stereotype, and every Turkish soldier is a sadist. It is implied that he was gay, which is unlikely given what we know of his personal and public life despite some Greek propaganda. He could be ruthless, but the language attributed to him is equally absurd. Then there is the failure to do any basic research. The most obvious is that his name wasn't Ataturk in 1922. He hadn't 'banished religion'. He hadn't even abolished the caliphate then or instituted his modernisation reforms. There is barely a page without similar inaccuracies.

In summary, this book is not just awful; it's offensive nonsense. Its only redeeming feature is that it is short. So don't waste your money.