This is Gábor Ágoston’s new book on the Ottoman Empire and its wars in Europe. This is a narrative history of the Ottomans from their emergence to what he calls the wars of exhaustion against the Venetians and Habsburgs in the 18th century. While the subject matter is not new, he draws on the latest research, destroying a few long-standing myths in the process. 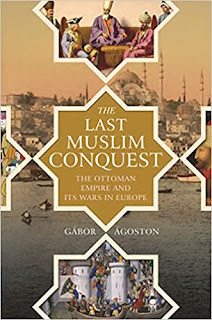 The first of those myths is that the Ottomans were simply holy warriors or Ghazis, forcing the boundaries of Islam. A theory promulgated by the Austrian Ottomanist Paul Wittek in the 1930s. While religion was an important driver, the Ottomans were pragmatic as they incorporated the polyglot and multiethnic societies on their borders and their administrative systems. Byzantine aristocratic families—the Komnenoi, Tornikoi, Gabrades, and Mavrozomai, became members of the Seljuk nobility. Greeks worked in the Seljuk administration, while the Byzantine emperors hired Turkish troops. The emperors also launched joint military campaigns with the Seljuks against other rivals. There were also many aspects of a shared culture and language.

Three of the four most famous Ottoman marcher lord dynasties—the Evrenosoğulları, Mihaloğulları, and Malkoçoğulları (the Sons of Evrenos, Mihal, and Malkoç/the Serbian Malković family), were of Christian origin. However, a conquest that did not start as a ghaza became one over time. Such an approach is a reminder that an emphasis on Ottoman pragmatism, flexibility, inclusiveness, and political shrewdness should not overshadow the importance of religious fervour in the early Ottoman society.

The Ottomans became a naval power more quickly than many realised. They turned Gallipoli into a maritime base and a naval arsenal, building on the existing Byzantine dockyards. Their use of Gallipoli as a springboard for raids in Europe demonstrated a significant difference between the Ottomans and the other Turkish emirs in Asia Minor. Ágoston spends some time explaining the Ottoman administrative structures and finances, which was an essential part of their success, and how they reined in the marcher lords. Their marriage strategy reminds us that the Ottoman conquest was not just about military force.

While the Ottomans usually eliminated the royal dynasties and aristocracies of the conquered lands after a victory, they tried to win over the lesser nobility by granting them military prebends (timars). Christian timariot sipahis, voynuks, and martoloses significantly augmented the Ottomans’ military strength and provided essential manpower in southeastern Europe while contributing tactical diversity and geographical knowledge of enemy lands. Even by 1520, Christians constituted 82% of the Balkan households.

It has been argued that the Ottomans failed to adopt new military technologies. However, from the 1420s onwards, they were on par with western Europe. This included the use of light cannons and firearms. By the second half of the fifteenth century, the combined use of field artillery, arquebus infantry, and the tabur had become a decisive factor in Ottoman battlefield victories.

By the 16th century, the strains on the Empire were beginning to show. More salaried troops took over from the timar system, while the Janissaries fighting potential was diluted. Whereas the salaried troops constituted only about 20–25% of Süleyman’s armies, their share rose to 40–50% by 1697–98. Conversely, while in the early 16th century, the timariot provincial cavalry accounted for 60–75% of the Ottoman combat forces, their proportion had dropped to 10–15% by the late 1690s.

There are many more insights like this as the story unfolds. While this is primarily about the wars in Europe, the campaigns in the East are not ignored. Particularly in the context of examining overall Ottoman strategy. This is an important book on the Ottomans, drawing on archival research with plenty of data and maps to back up his arguments. While at 688 pages, this is not a short read; it is accessible in style and price to the general reader. If you want to hear more, the author gives an interesting interview on the New Books Network.

An excellent excuse to dig out some Ottoman v Habsburg wargame figures as well. 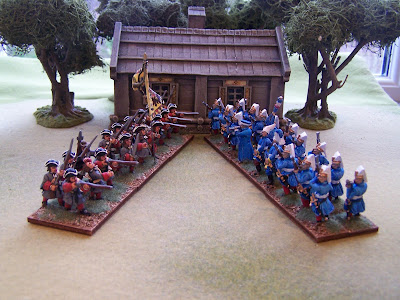