I have made more progress with the Cyprus 1974 project in 20mm. I now have some opponents for the Turkish Armed forces in the Greek Cypriot National Guard (EF). This should mean some tabletop action over the holidays, so watch the Twitter feed.

The National Guard was formed after independence. It was meant to be a mixed Greek and Turkish force, but that quickly broke down as inter-communal violence broke out, and the Turkish minority was forced into enclaves, defended by their own militia, the TNT. In March 1964, the new National Guard was established, and conscription was introduced in June. Initially, the National Guard was equipped with former British weapons and improvised vehicles, but they were quickly supplemented by equipment from Greece. Later the Soviet Union provided some weapons from Warsaw Pact stocks.

By 1974, the National Guard had a regular standing force of around 12,000 men backed up by a reserve of 20 battalions, of which about 10,000 younger reservists could be mobilised quickly. It was commanded by Greek officers, and as the coup demonstrated, was controlled by the military junta in Athens. In addition, there was a much smaller separate armed police force controlled by President Makarios.

The headquarters was in Nicosia, organised into five Tactical Commands spread across the island. Each command typically had two or three regular infantry battalions, double that number of reserve battalions, and support weapons. Three regular commando battalions were based in Nicosia, plus a reserve commando battalion. The Artillery Command was also based in Nicosia, although batteries were usually distributed around the island. It was equipped with 25pdr and 100mm field guns, 57mm ATGs, 75mm mountain guns and 40mm AA guns. Finally, the Armoured Command had a tank battalion (T35/85s), a mechanised infantry battalion (BTR-152 APC) and an armoured reconnaissance battalion (Marmon-Herrington AC). Again these were generally parcelled out across the north of the island where the Turkish landings were anticipated. National Guard battalions were significantly smaller than their Turkish Army counterparts, typically 350-400 soldiers.

The battlegroups formed by the National Guard works quite well for the modern Bolt Action rules I use. So far, I have painted the T34/85, BTR-152 and Marmon Herrington armoured cars. While these were outdated by 1974, they actually performed reasonably well. The tank battalion (23 EMA) had two tank companies, each of 16 T34/85s and an assault company of six BTR-152s.

The armoured reconnaissance battalion had three companies, each of 12 armoured cars and an assault company of seven APCs. 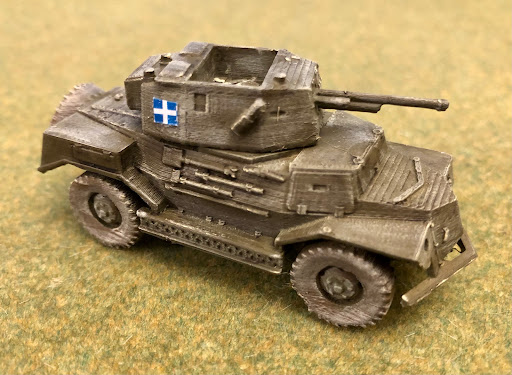 From photos, it appears that the reserve battalion infantry had a mix of khaki and light green uniforms or just civilian clothes. It is often difficult to differentiate between the EOKA B fighters and the National Guard. The primary infantry anti-tank weapon was the recoilless rifle. I used a mix of figures from several ranges, with helmets, berets and bareheaded to represent these troops.

The regular mechanised infantry appears to be more uniformed in a khaki uniform with shorts. These look like WW2 desert British, although with less webbing and kit. I used the Dixon range because they are excellent sculpts for 20mm. The mechanised infantry battalion (286 MTP) had three companies, each with 8 BTR-152s. Plus two RCL (106mm and 57mm) and one 81mm mortar platoon. 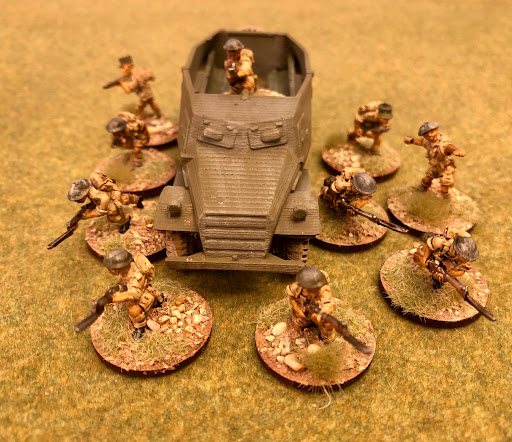 That's it for now. I still plan to do a commando squad when the figures arrive.