Memoirs of a Janissary

One of the challenges for someone with my interest in the Balkans is my poor language skills. For that reason, I am very grateful to those who translate books or write in English, even when that isn't their first language. My latest reading is the translation of the memoirs of a Turkish Janissary, Konstantin Mihailovic, by Benjamin Stolz. He translated the oldest Czech text of his memoirs. 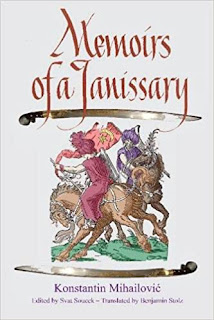 Mihailovic served during the reign of Sultan Mehmet II (1451-81), known as the Conqueror, following his capture of Constantinople in 1453. Despite the title, it seems likely that he was an auxiliary attached to the Janissaries for around eight years between 1455 and 1463. Despite some inconsistencies in his story, the gist of his description is accurate and could only have come from someone who observed the institution and events from close up.

The Janissaries were created by Sultan Murat I as an elite infantry corps, the name being a derivation of the Turkish words yeni cheri, or 'new troops'. It was the creation of this elite infantry base that is credited with many of the Ottoman victories, and is arguably one of the reasons for their success, compared with other Turkic tribes of the period. In this period, they were recruited through the devshirme, a levy of Christian youths taken to Istanbul, converted to Islam and trained as Janissaries or other court officials. Some achieved the highest ranks in the empire, including the grand vizier. Serbs, like Mihailovic, were a popular source of recruits.

His memoirs give us limited information about the man himself. He may have been a miner either from Ostrovica or Novo Brdo. As he claims to have been at the siege of Constantinople, he was likely a member of the Serbian contingent sent by Despot Murad Brankovic. He describes the campaigns he took part in, which included Trebizond, Wallachia (against Vlad Dracul) and Bosnia. His story ends when he was left with a garrison of Janissaries in the Bosnian fortress of Zvecaj.

The most interesting part of the book is not these campaigns but rather his description of the Ottoman institutions he saw or was told about. As such, it is an important primary source, even allowing for his polemic against the 'heathen' Turks and Islam generally. He wrote his memoirs later in life when the Ottomans were perceived as a wider threat to Europe.  The text is a bit disjointed in places and isn't an easy read. However, the editor (Svat Soucek) has provided extensive notes that explain the context and corrects the obvious errors.