I have been painting a few more units for my Cyprus 1974 project, including a much needed Bofors AA gun and 25pdr field gun for the National Guard. The Turks now have an M106 mortar carrier for their mechanised infantry.

I have also been reading some Turkish memoirs of the fighting, a challenge for my minimal Turkish and Google translate, which needs to do a bit of work on its Turkish as well! Today's wargame was based on one of those stories.

By 1600hrs on 22 July, when the agreed ceasefire formally came into being, Turkish troops landed from the sea had reached Kyrenia and had mostly secured the pass in order to link up with those landed by air into the main Turkish enclave north of Nicosia. However, while major operations halted, both sides continued low level fighting. The Greeks continued to attack Turkish enclaves and laid mines in an effort to box the Turks in. The Turkish forces continued to expand their lodgement and bring in reinforcements.

Overlooking the landing area and the port of Kyrenia (Girne) is the Pentedaktylos mountains. They include three medieval castles and an Abbey, which were turned from tourist attractions into a battlefield. One of these was Buffavento Castle, built by the Byzantines in a strong position to watch over the coast, and was captured by Richard the Lionheart in 1191. It is perched over 3,000 feet up in the mountains with a narrow access road.

On 25 July, the Turkish 3rd Airborne battalion attacked Buffavento Castle, which was held by the Greek National Guard's 361st Infantry Battalion. The attack began at 08:00 but had stalled by 14:00. The attack recommenced the following day with two airborne platoons supported by machine gun emplacements in the woods. The defenders were distracted and pinned by machine gun fire while five squads climbed the sea facing edge of the mountain without being spotted. The castle was in Turkish hands by 12:15. Lieutenant Ali Sencer Ali described their relief at capturing the large water store in the castle and a cauldron of cooked pasta, which they made a Greek prisoner eat first in case it was poisoned. Not having a radio, they couldn’t report their success so a soldier climbed up a lightning rod pole with a Turkish flag. The resting commander was woken by a surprise telephone call from the battalion commander to a phone in the castle he hadn’t seen.

So, onto the tabletop. You have to use a bit of imagination when replicating a battle at 3,000 feet, but the essence is here. 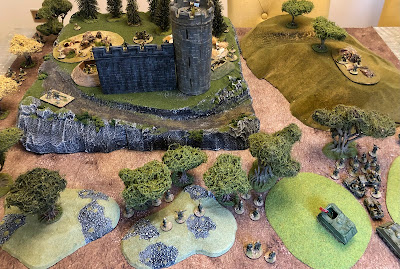 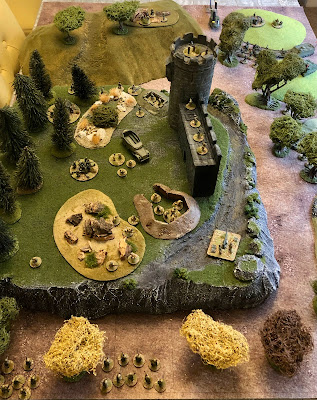 The battle started with a Turkish F-100 Super Sabre on a bombing run. My shiny new Bofors gun fired and missed. Why is it that newly painted units always seem to fail! However, the bombs didn't do too much damage. 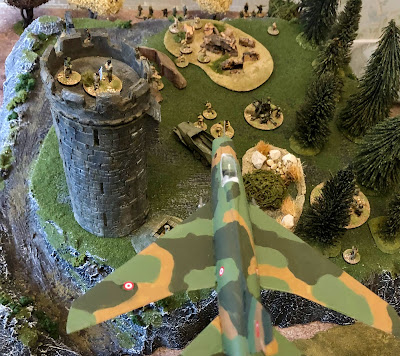 The Turkish infantry on the approach road opened fire with artillery support and caused heavy casualties to the defending infantry squad and MG position. This drew the second squad from their reserve position. This meant there was only a handful of troops to face the Turks that had scaled the cliffs and appeared in the rear. They quickly overpowered the remaining National Guard units and captured the tower. 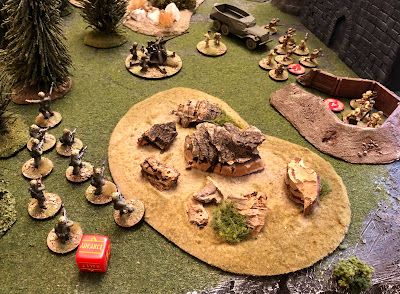 Tea time for them, and me! 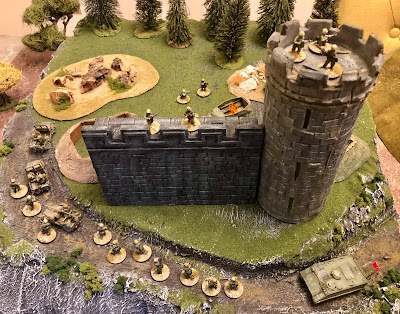 A short and furious game, but something a bit different.
Posted by Balkandave at 18:06