This is Camil Muresanu's biography of the Hungarian warlord Janos Hunyadi. Very little has been written specifically about Hunyadi (in English at least), which is surprising given his central position in the story of resistance to the Ottomans in the 15th century. Helion has a book on the stocks, but it was scheduled for autumn 2020 and hasn't been published. Even allowing for the mess that publishers schedules are in at present, this doesn't look hopeful! 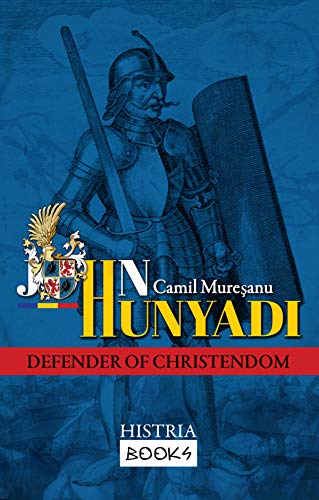 Hunyadi was born around 1406 into minor nobility. His father was a household knight, although a later rumour implied he was a bastard son of King Sigismund. There is little evidence for this and precious little at all about his early life. He visited Italy with Sigismund in 1431, where he would have seen the latest military developments. He also observed the tactics of the Hussites and adopted some of their doctrine in his later armies.

His early successful actions against the advancing Ottomans in 1441-2 brought him advancement in the form of commands and land. His use of mercenaries, including Hussites, was a significant development, although funding them was a challenge in a divided Hungary. A solid infantry base around wagons and light cavalry distinguished the Hungarian army from its western counterparts. The upper nobility was less concerned about Ottoman expansion, and Hunyadi often relied on the lesser nobility and later the towns and cities to fund his campaigns. He accepted estates from the King to support his campaigns as the Treasury rarely had the resources to put effective armies into the field.

The book covers all the well-known battles of the period, including Nis, Second Kosovo, Varna and Belgrade. What was new to me were the internal conflicts against the growing power of the Hapsburgs, particularly during his period as governor of Hungary when there was no King. The confrontation with Jiskra of Slovakia in particular.

This book is a sympathetic, almost fawning, biography of Hunyadi in the nationalist history genre. The 'Great man' theory of history is not in fashion, although I listened to a History Extra podcast this morning with Judith Green about her new book on the Normans. She argues that medieval leaders certainly needed charisma, and Hunyadi must have had that at least. Like Hannibal, commanding a largely mercenary army certainly required leadership skills of the highest order. He was also a skilled political operator and administrator. However, his battlefield record was very mixed, a point the author brushes over. The claim that Hunyadi's actions held back the Ottomans for a century is getting a bit carried away.

There are stylistic aspects of this book that grated a bit with me. For example, the wicked Ottomans and their despotic rule ignore that Hunyadi was not above exploiting the peasants himself, most of whom noticed little difference when they swapped masters. Also, English does not appear to be the author's first language, and the prose is a bit stilted. Having said that, it is not a long book, and it does introduce aspects of the period that haven't been well covered before.

So, onto the tabletop. A standard 130pt game of To the Strongest! this afternoon.

The Ottomans stormed across the table in their first move, taking out the Hungarian artillery as well.

Hunyadi is rated a 'Great Leader' under these rules, which gives his unit an extra replacement card. However, he almost came a cropper in the second round when a bunch of grubby Azabs scored a hit, and his unit was finished off by Siphai. The fickle dice (or in this case cards) of history rescued him and he skipped to another unit. 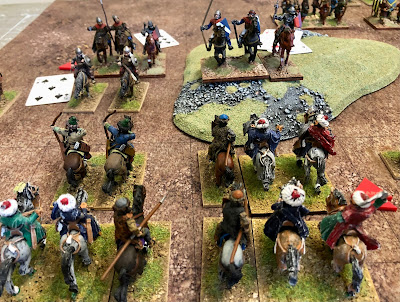 After that, he rallied and destroyed the Ottoman left flank while the Hungarian left was also successful. Game over as they turned inwards to flank the Ottoman centre. 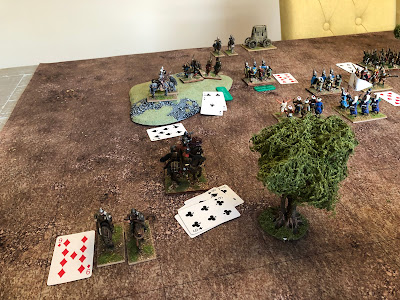