This week's painting has added the airpower dimension to my 20mm games. Cyprus was too far from the Hellenic Air Force bases in Rhodes and Crete, so the Turkish Air Force had total air superiority. The Greek Cypriot National Guard had a few WW2 era AA guns, which had some success, but in the main, the Turks could strike where they wished.

The main Turkish Air Force (TAF) ground support aircraft was the F-100 Super Sabre. Nicknamed Hun by US pilots and Baba (Father) by Turkish pilots, it was designed as an air superiority fighter but was quickly adapted to the ground support role, seeing action in Vietnam. The main variants used by the Turkish Air Force were armed with four 20mm guns and various combinations of external loads, including bombs and rockets with a capacity of 7,040 lb. It had a maximum speed of 924 mph (Mach 1.4) and a maximum range of nearly 2000 miles. By 1972, the USAF had phased the aircraft out of active service, but it continued with the Turkish Air Force until 1987.

This model comes from the Turkish PM Model company, which has the added advantage of Turkish decals. It's a fairly basic kit, which perfectly suits my large fingers and thumbs. The TAF had switched to the new NATO camouflage before the conflict. You really need an airbrush to do this justice, but it will do for a wargame model. 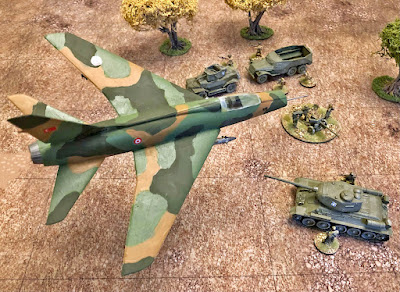 The plan to bomb Greek defences prior to D-day was dropped to maintain the element of surprise. The Turkish Air Force was ordered to only engage with targets identified by Air Control Teams in the landing zones to avoid civilian casualties. This was relaxed on 21 July when the landing zones were under the greatest pressure from Greek counter-attacks.

While ground support was critical to the Turkish victory, it wasn't always successful. The worst example was the sinking of the Turkish destroyer TCK Kocatepe by F-100s who mistook it for a Greek destroyer of the same class. This was largely down to communication failures.

I have recently been reading some Turkish memoirs of the conflict. While they were generally grateful for the air support, there were some problems. During the fighting in the mountains, F-100s dropping napalm started significant forest fires, making it difficult to identify enemy positions. The paras and commandos doing the fighting didn't have enough air control teams to bring in air support when and where they needed it. Turkish Cypriot civilians frequently mention the morale value of ground support operations. They, of course, knew how effective it could be thanks to previous interventions, including the Kokkina siege of 1964.

Twelve TAF aircraft were lost during the conflict. Some were shot down by flak and others from engine failure and accidents. Major Fehmi Ercan, who died on the first day of the conflict, has the main North Cyprus airport today named after him. His grave is at Kyrenia Karaoğlanolu Cemetery because he operated as a Forward Air Controller with the landing force. 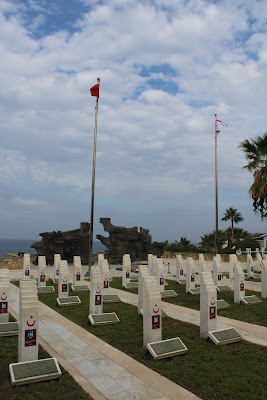