This is a new book by Quintin Barry on the Austro-Hungarian naval victory against the Italians at Lissa (known as Vis today) in 1866. However, the book is really about how the Industrial Revolution changed naval warfare in the mid-nineteenth century, culminating in the Battle of Lissa. 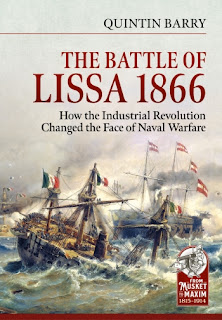 The island of Lissa (Vis) is off the Adriatic Coast, and in 1866 it was part of the Austro-Hungarian Empire. During the Napoleonic Wars, it had been a British base for the frigate squadron of William Hoste. The British had built up the defences of both harbours on the island, and the Austrians had developed these and added a 2,000 man garrison. It is easily my favourite island on that coast, but in this story, it was almost an accident that it became the site of such an important battle in the history of naval warfare.

Most of this book is about the transition from wooden sailing ships of the Napoleonic era to the introduction of three key technologies - the screw, steam engines and ironclads. Barry takes us through the stages of development, which effectively made redundant the large number of warships left over from the Napoleonic wars. This was a particular problem for the Royal Navy, whose naval superiority could have been overtaken as all navies, particularly the French, effectively started from scratch. As with all technology, there was a debate about which to adopt with the more conservative elements reluctant to change. This resulted in a mix of ship types as navies experimented with different designs.

HMS Warrior, preserved at Portsmouth, was the Royal Navy's first iron-hulled warship, following its French equivalent, the Gloire. However, the Royal Navy continued to build wooden ships as well. By the 1860s navies had a mix of wooden warships, some with armoured plating as well as full ironclads. The American Civil War had highlighted the impact of the ironclad, although these were essentially coastal warships, and the lessons for ocean-going navies were not fully understood. Not only did tactics have to change, but navies needed coaling stations worldwide.

The significance of Lissa is that before 1866 only one European ironclad had gone into action. The British built Danish ironclad Rolf Krake was hit 150 times by Prussian batteries besieging Dybbol in the Second Schleswig-Holstein War but suffered minor damage.

The Austrian Navy was pretty small as it had been a largely land-locked empire. The Italian Navy was also reasonably new following reunification, although it had a long naval tradition. However, it was also significantly larger and, on the outbreak of war, was ordered to seek out the Austrian fleet or blockade its main base at Trieste if it didn't come out.

The Italian Admiral Persano appeared very reluctant to engage the enemy and found a succession of reasons for not sailing to Trieste. He was eventually ordered out and decided to attack Lissa. His fleet bombarded to Austrian defences and finally put marines onshore. The Italian ships did suffer from several technical problems, and his subordinates showed a shocking disregard for his orders when he gave any. The Austrian fleet was commanded by Wilhelm von Tegetthof, who had a clear idea of the tactics he wanted to adopt and ensured his subordinates understood them.
As the Austrian fleet approached Lissa, the Italians gave up the siege and sailed to meet them, or at least the main elements. Persano made several strange decisions, not least shifting his flag at the start of the battle without telling the other commanders. The decisive clash was the ramming and sinking of the Re d'Italia by Ferdinand Max. They also lost Palestro and several other ships were seriously damaged. It was a clear cut victory for Tegetthof, coming after the Italian defeats on land. Only the Prussian victory at Sadowa saved the Italians in the peace treaty.

The success of the ram caught the popular and professional imagination, but its use was made obsolete by further technological developments. However, that shouldn't detract from the achievements of the Austrian fleet in winning the first major ironclad battle.

Quintin Barry's books on the 19th century are always worth reading, and this is no exception. I doubt if I will be tempted to dabble in what was very much a transitional period, but I will get my earlier Adriatic navies out once more. 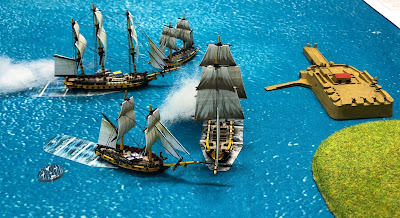