This is a new Osprey Campaign book by David Sutton on a less well-known campaign of WW2, the Allied invasion of Vichy French Syria and Lebanon, Operation Exporter. 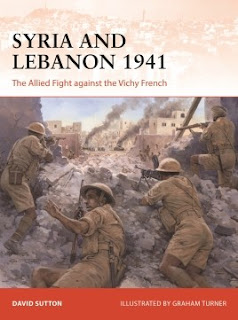 The Iraq revolt had highlighted to the British the risks of having a potentially hostile Syria in its rear as it did battle with Rommel in the Western Desert. The Germans had used Vichy French airfields in Syria to send supplies and fighters into Iraq, and Churchill, supported by de Gaulle, argued for an invasion. Wavell pleaded with Churchill not to be forced to open another front, as he was already stretched with commitments in Greece and relieving Tobruk. However, Churchill insisted, and Wavell had to cobble together a force for the invasion.

The lead units came from the 7th Australian Division, less one brigade that was besieged in Tobruk. They were supplemented by horse-mounted and lightly armoured cavalry regiments and the 5th Indian Brigade Group. Tanks and anti-aircraft weapons were fully committed to Operation Battleaxe, the relief of Tobruk. The Free French contributed a light division, some marines and a Circassian cavalry unit that defected from the Vichy forces. Six cruisers and eight destroyers provided the naval force for operations off the coast and a dizzying array of aircraft types that could be spared from Battleaxe.

The Vichy forces were a mix of regular and colonial troops, including Senegalese, Algerian, Morrocan and Tunisian units. There were also four battalions of the French Foreign Legion and two cavalry regiments equipped with 90 R-35 light tanks and an assortment of armoured cars. In addition, there was a small naval squadron of two destroyers and five submarines and a substantial air force of 130 aircraft, double those available to the Empire forces.  There is a complete order of battle and details of the units involved as usual with this series.

The British plan was to advance in three columns from Palestine. De Gaulle claimed Vichy units would defect. However, not for the first or last time, this didn't happen and the Vichy commander, General Henri Dentz, offered a strong defence. This was primarily to give the Germans no cause to remove what freedoms Vichy France enjoyed. The main chapters cover the campaign in some detail. It certainly was a more challenging fight than the British and Free French expected with Vichy forces defending the river lines and frequently counter-attacking. The absence of tanks was a severe handicap, and Vichy aircraft effectively slowed the advance. Nevertheless, by early July, the Australian and British troops had captured Damascus and were close to taking Beirut. Indian forces had flanked the Vichy defences from Iraq and headed for Aleppo. A ceasefire was agreed on 12 July.

This campaign was overshadowed at the time by the German invasion of the Soviet Union and has been largely forgotten since. However, with some 2,400 dead, it deserves better recognition. This book certainly achieves that. There are excellent maps and period photos, although I would have liked to see more on the Vichy forces, including some colour plates. There is no chapter on visiting the battlefields today, for obvious reasons!

For the wargamer, British and Empire forces can come from Western Desert armies, although these mainly were infantry battles in very different terrain from the desert. Except for the desert flank, which included a battle around the ancient ruins of Palmyra. So you can dust down some ancient scenery for this one. The French colonial troops are more exotic, including camel troops and spahis. Certainly not in my collection, but I see EWM do a pretty comprehensive range in 20mm. I will try and resist!