The long-awaited second edition of my go-to micro armour rules for the modern period arrived this week.  Cold War Commander is now produced by Pendraken and is the modern version of the popular WW2 set Blitzkrieg Commander. I have been eagerly waiting for these as I lost my PDF version in a computer transfer and relied on the partial set I printed out.

While the rules are commonly used for 6mm and 10mm games, you can use them for any scale with some amendments to the measurements. A base is usually a platoon, which means most games are played at the regimental scale or a battlegroup in the rules. Although you can again adjust this for smaller-scale games. No rebasing is required, and most of my collection is on 30mm square bases I made for Spearhead. If I was starting from scratch, I would use the small dice frames Pendraken sells, as each base usually takes several hits before being removed from the table.

The rules start with a useful chapter on the game concepts. This is helpful because it helps the players understand the detailed rules. For example, I played several games before clicking that hits are removed at the end of the active player's turn.

The basic mechanisms don't appear to have changed. You start with scheduled actions like off-table artillery and airstrikes. Then initiative moves when you are close to the enemy. Finally, the command phase in which you issue orders, move, fire etc. This is the bit some people are not keen on as it is possible to make more than one move or firing action if you roll low enough. In effect, it rewards battlegroups with better command. I found this a bit difficult at first, but the modifiers limit their effectiveness in practice.

There are a few changes that I don't recall in the first edition. Profiles and the 'gone-to-ground' rule will probably encourage infantry to hunker down, which seems reasonable. There is a similar rule in Bolt Action. Recce used to be an optional rule, but it now has a chapter of its own. The new edition points to optional rules available on the Pendraken forum. Some add granularity, and others appear to be fast-play options. It should also be a good way of making changes as players spot bits that don't work well.

The command mechanism looks pretty similar, although there are a few more modifiers, and the command blunder table has more variants. The original rules had helpful examples, and these are, if anything, more plentiful in the second edition. The same applies to firing with a similar mechanism and some tweaks to the modifiers. The outcomes are similar with knock-out, suppression and fall-back. I assume close assault has been similarly tweaked, although I used it rarely on the tabletop!

All the specialist equipment you could want is covered AT, artillery, air support, helicopters, engineering etc. In addition, there are 16 generic scenarios, which include solo options using hidden deployment. Something that many players would have found helpful during the lockdown. There are a few army lists in the book, but most will be available as free downloads. This is sensible as it will enable amendments and reflect the discussion on the forum.

I haven't had a chance to play them yet, and I have several modern projects in the lead pile. However, it did inspire me to get at least one unit completed. These are Kurdish YPG fighters for the Syrian conflict. Just a couple of squads, which I will probably use for modern Bolt Action rather than CWC2. The figures are 20mm from the Elhiem range. 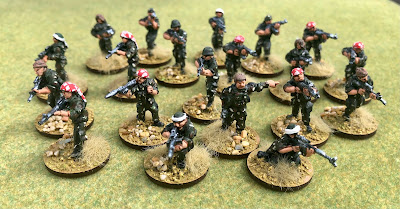