This is Nicholas Rankin's history of Gibraltar during WW2. Another book I probably wouldn't have read had I not spotted it in our local library. It is a weighty tome at nearly 750 pages, made larger by a lot of padding. I appreciate that this is probably aimed at the general reader, but I could have done without the chapters on the war more generally. A tighter volume on Gibraltar itself would be a better read along with the chapters on Spain during the war, which does include new material. 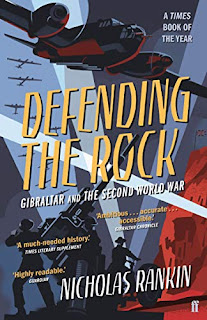 Gibraltar is one of the few surviving outposts of the Empire, holding a strategic position at the entrance to the Mediterranean but really part of Spain. At the outbreak of WW2, it had several possible enemies, including Germany, Italy, Spain and Vichy France. The job of addressing the many shortfalls in Britain's defences, including Gibraltar, fell to Edmund Ironside. I didn't know that his appointment was opposed by MI5 because he was a suspected fascist sympathiser. Or that his proposed deputy, Major General J.F.C. Fuller (the tank expert), was an extreme right-winger and an anti-semite to boot.

Like Singapore, Gibraltar was well defended from the sea but much less so from the landward side. The new deputy governor was Major-General Mason-Macfarlane, a gunner who immediately got to work on strengthening them. Another well-known face who spent a lot of time on the Rock was the actor Anthony Quale, who later served with SOE in Albania.

There is a lot in the book on the intelligence war. Rankin also wrote Churchill's Wizards and knows his way around this stuff. The Abwehr had a permanent base on the mainland and a network of agents. As most of Gibraltar's workforce came from Spain each day, this was a security nightmare. Fascist Spain had close ties to the Germans and the Italians throughout the war, although due to the country's state after the civil war, they worked hard to avoid formally joining the Axis.

The Germans sent a team of experts, with Spanish assistance, to do a reconnaissance of the Rock in 1940, which included Rudolf Witzig, the leader of the attack on Fort Eben Emael in Belgium. He concluded that a glider or parachute assault would be suicidal. All plans after that were based on a land attack. The British built an additional 25 miles of tunnels into the rock during WW2 to counter this. Mostly by miners from the UK, joined later by Canadian miners. They also lengthened the runway, although it was still dangerously exposed. The main German plan was named Operation Felix, part of broader involvement in Spain under Fuhrer Directive No.18. By December 1940, Hitler had lost patience with Franco and moved on to other projects. Some argue this was one of his greatest mistakes, as in 1940, Gibraltar, even with a garrison that grew to 10,000 men during the war, was not likely to be able to resist. He later wrote that it was a mistake and Göring wrote similarly from his prison cell in 1945.

The chapters on Spain cover an aspect of the war that hasn't been written about extensively. The Germans made various offers to Franco, some of which didn't go down well because they involved the Germans taking Spanish territory in the Canary Islands. One of Franco's concerns was that the allies would take these islands if he joined the Axis. Other tactics reminded me of Turkey during the war, including long lists of military and other supplies. Spain was starving during the war and relied heavily on food supplies from America.

Gibraltar was bombed during the war, and it remained an important naval base. It was also attacked by Italian midget submarines, with one team getting within 70 metres of the battleship HMS Barham. Its high point came during Operation Torch when the runway housed more than 200 aircraft. The security issues were immense, and the battles between the intelligence services are covered in detail. More than one Gibraltarian traitor was executed during the war for treason. In addition, there were 58 sabotage attempts by the Germans, nine by the Italians and three by the Spanish Falange.

Franco supplied the Germans with critical minerals (particularly tungsten) and military assistance, including a division of volunteers for the Russian front. Despite this, Churchill shored up Franco's regime when the US favoured collapsing it. The Americans called it Churchill's 'appeasement'. Spain remained under the fascist boot until Franco's death.

Overall, while the book could have been tighter, it's an interesting read. Not just for the history of Gibraltar but for the wartime relations with Spain.