This is the third in the modern military fiction series, Smoke over the Bosporus by Maciej Jonasz. The basic premise is that the Turkish Government moves from a soft power neo-Ottoman position to a hard power version. In the first book, they invade Bulgaria only to be repulsed by a new Balkan League. In the second book, Greece uses the confusion to invade Turkish occupied North Cyprus. This book involves an American armoured infantry company on a NATO exercise in Turkey, which gets drawn into a conflict with the Turkish Armed Forces after taking nuclear weapons from the US Air Force at the Incirlik Air Base. 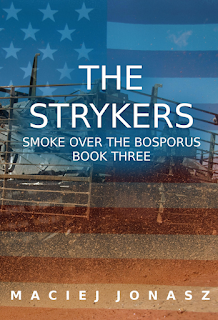 The Stryker is an eight-wheel AFV built in Canada for the US Army. It was conceived as a family of vehicles forming the backbone of a new medium-weight brigade combat team (BCT) to strike a balance between heavy armour and infantry. It was a controversial concept that has had mixed success. Nevertheless, the company has several variants in the book, including the 105mm gun mounted version. 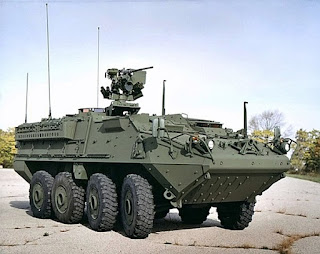 When the Turkish invasion of Bulgaria started, the joint exercise was cancelled. Then for unclear reasons, the Turkish military decides to attempt to disarm and intern the Stryker company. The logical move would have been simply to let them go home, but I suppose that wouldn't make a decent story. The Americans learn about the plan and resist because a corporal has a gay relationship with the Turkish liaison officer; really! In parallel, the US Air Force personnel at Incirlik are also detained, and the nuclear bombs are taken away by Turkish intelligence. You would have thought starting a war with Bulgaria and Greece was enough for the Turks without taking on the USA as well!

The plot gets even more absurd when Turkish intelligence brings the nuclear bombs to the same base as the Stryker company. When you have the whole of Anatolia to choose from, why on earth would you bring them to the one place there are well-armed Americans! Anyway, the Strykers decide to liberate the nukes and fight their way to the coast.

I had some issues with the political context of the first two books, although I thought the military aspects were excellent. Sadly, the author has gone off at the deep end in this book, with all sorts of nonsense rants against diversity and political correctness. The US President is so liberal that he falls over himself to accommodate the Turks and undermine the safety of his troops. We have sub-plots about Muslim extremism in the military and immigration, which are straight out of the most rabid white supremacist mythology. I fear the Bulgarian author's grasp of US politics is based on watching too much Fox News!

You will have gathered that I wasn't impressed. In fairness, the battle scenes are good, but the political context and the plot are just downright silly. One to be avoided.