My latest wargame project has been completed, much to the relief of my replenished lead pile. How those lockdown days now seem a long way off! It is timely because I have been playing a lot more Black Powder recently, and more French will be needed for a big game we are planning for the GDWS Napoleonic Open Day on 22 May. The French and Ottomans will be lining up against the British and Ali Pasha. A what-if' before anyone scurries for their history books based on the French-Ottoman rapprochement after 1802.

The French involvement in the Balkans started in 1797 with the brief occupation of the Ionian islands. After Austerlitz in 1805, they acquired former Venetian provinces in Istria, Dalmatia as far as the Bay of Cattaro (Kotor) in modern Montenegro. They also grabbed Ragusa in 1806. Another failed effort against Napoleon by Austria in 1809 resulted in the loss of the rest of Istria and the inland provinces of Carniola, Carinthia and the Croatian military border. In December 1809, these conquests were brought together in the Illyrian Provinces under the command of Marshall Marmont. Small scale warfare continued with the British, Austrians and Ottomans until the French abandoned them in 1814.

As elsewhere in Europe, the French recruited locally raised troops as garrisons. Some of these interesting units form the basis for my latest project. The figures are 28mm and are mostly adapted from the Wargames Foundry range. I prefer the Front rank range, but when I looked for figures, they weren't available due to the transfer to Gripping Beast. I have compromised on the basing between individual basing and my usual three figures on 60mm x 20mm multiple bases. This allows me to use them for Black Powder and Rebels and Patriots, or Sharp Practice. The small war conflicts in this region are more suited to the small battle or skirmish games.

The first unit is chasseurs of the Royal Dalmatian Legion. These troops came from Italy and Dalmatia, some being ex-Austrian soldiers, hence the corsehut, which I particularly like. 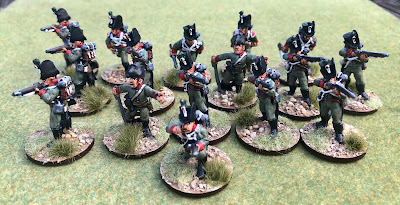 The Illyrian Chasseur Regiments were former Grenzer regiments, usually referred to as the Croat regiments. Marmont persuaded Napoleon to recruit these units from the military border and retain their traditional organisation. They rarely operated above battalion level.

The Illyrian Provinces were not exempted from Napoleon's need for extra manpower for the Russian campaign. This led to the expansion of the Illyrian Chasseurs through Croatian Provisional regiments. These figures are Voltigeurs. 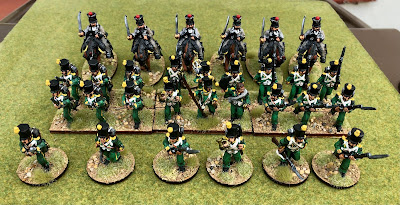 Also, in the above picture, we have a small unit of Croatian Hussars. They were still serving in France in 1814.

That will do for now, as I can field a Black Powder brigade of these troops on 22 May. There are some other colourful units I wouldn't mind doing, including Serezaners, which acted as scouts for the Croat units. But, sadly, I can't find a suitable figure. The Albanian Regiment, in the traditional dress, can probably be recruited from Ottoman ranges.

My reference source is the Osprey MAA 410, 'Napoleon's Balkan Troops', by Vladimir Brnardic and illustrated by Darko Pavlovic.