'Chosen Men' is a new set of skirmish rules for the Napoleonic Wars, written by Mark Latham and published by Osprey. Mark used to work with Warhammer Historical and produced Legends of the Old West and Trafalgar. More recently he wrote the Osprey fantasy rules, Broken Legions.

These are genuine skirmish rules with one model equalling one man. A typical unit is led by an officer and consists of 4 to 9 figures. A typical standard 350 point game on a three foot square table would have three units a side. (see roster below). The game is designed for 25mm figures, although I can’t see any difficulty in playing with other scales. Think Sharpe skirmish episodes, for the sort of game these rules are aimed at. Timely for me as my beloved being away on a course recently allowed me to work through the Sharpe boxed sets on Virgin!

The game starts with both sides rolling for initiative and war strategies. This gives a one off action that is played immediately or can be saved. In my test game the rifle unit was delayed a turn and the French light infantry had to undertake a command test when they strayed near the table edge. The idea is to represent the battle going on around this skirmish.

The action phase allows players to activate a unit alternatively, so you can pick your most vital unit first. Actions are move, charge, fire etc and each one costs a TAC point. Better units have more points, but as you can only use one action per move and can’t move and fire, I didn’t find this very restrictive. Movement is 6” for foot and 10” for horse, although a double move is an additional D6. The default formation is skirmish, but you can form into line and column if you want, with commensurate factor gains. You can also order a hold action which allows a delayed action later the phase. This allows you to react or fire in response to enemy movement. Firing is a straightforward accuracy roll to hit followed by damage rolls based on the units resilience .

The next phase is melee, with weapon and unit melee factors and an ‘old style’ table to calculate the score to hit. Again, hits are converted into damage based on the units resilience. Most figures have one wound, but officers and cavalry have 2 or more. Then you apply combat resolution factors to find the loser who takes a command test.

Finally, there is the recovery phase, which involves rallying and moving fleeing units and checking victory conditions.

There are optional commander traits and strategies that you can purchase for army list points. I didn’t use them, but they clearly add some colour to a game, without being too overwhelming. There are also special rules like ‘crack shot’ and ‘devastating charge’, which again give additional factors in appropriate circumstances. The army lists are restricted to the Peninsular and Waterloo campaigns, but it wouldn’t be difficult to adapt them for other nations. You also get six scenarios.

The production quality is typical of the Osprey games series. A logical process and plenty of photo’s. However, there is no quick reference sheet, which means a lot of page turning. With all the special rules, your copy of the rules is going to be well thumbed. It really needs a decent process chart, otherwise you miss important rules.

These rules plug a gap in the Osprey series, for the period up to ‘The Men Who Would Be Kings’ colonial rules. However, the mechanisms are very different. It’s probably competing with Sharp Practice 2. If you don’t like card driven games, or the Lardies more random approach to unit activation, these rules might be for you.

My test game was a simple Peninsular action with light troops and cavalry. The standard game will probably be done and dusted in 90 minutes or so once you have a handle on the rules. If this a new period, then you only need a small number of figures. Significantly fewer than Sharp Practice.

Finally, some eye candy from the test game. 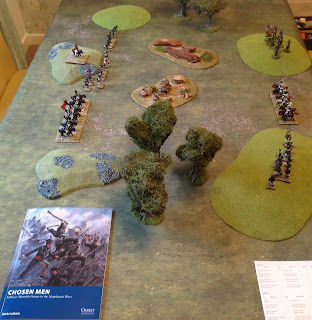 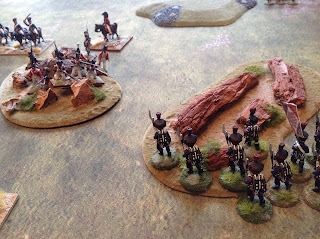 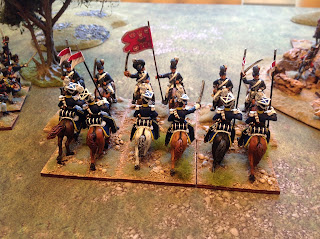