The Japanese invasion of Malaya and the fall of Singapore in 1941-42 was a military disaster of unprecedented proportions for the British Empire. Mark Stille covers the reasons for this very well in the Osprey Campaign No.300 'Malaya and Singapore 1941-42'.

From Churchill downwards this was not Britain's finest hour. The strategic assumptions were wrong and Churchill even failed to deliver on his own poor plan. On the ground, the British Empire commanders failed to take advantage of their material superiority in important categories through poor planning. The consequences were a staggering 138,708 casualties, 130,000 of which were prisoners of war. In contrast the Japanese 25th Army used intelligent planning and relentless initiative to keep the all important initiative. Tanks played an important role, but it was the Japanese infantry who really delivered the victory.

This campaign was one of my recent wargame projects, so I have read a number of detailed campaign histories and memoirs. Mark Stille has written a very good concise history of the campaign with lots of quality photographs and the excellent illustrations by Peter Dennis. What Osprey do better than other publishers is excellent maps, both of the campaign and the key battles. If you are thinking of doing this campaign on the tabletop, this book is an ideal starting point.

This represents a typical action during the campaign, using Bolt Action rules and 28mm figures. 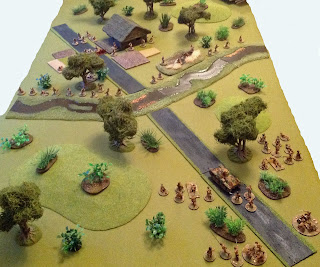