My fiction reading this holiday has been Robert Conroy's Germanica.

This is alternative WW2 history. The essence of the story is that Goebbels escapes to the Alpine redoubt with enough troops to be a significant threat. The allies are war weary and the domestic pressure for peace is building. 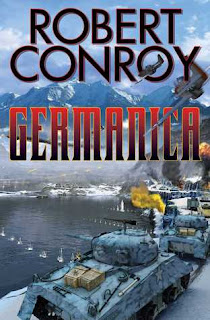 We get a bit of the strategic overview, including the neglected role of Switzerland during the war. The action on the ground is based around OSS operatives across the border in Switzerland and a US captain with the leading US infantry division.

In fact, Hitler opposed the concept until it was too late in April 1945. Despite support amongst some in the German high command, it never got off the ground. However, the concept did concern allied planners who concentrated resources to cut off retreating units from going there.

It is a least an interesting 'what if?'. What would have been the allied reaction to the potentially heavy casualties involved in attacking narrow Alpine passes. Particularly if Germany had a viable atomic bomb as a deterrent.

The author makes a decent go at the alternative history and makes a readable human story around the main characters. Perhaps not the best historical fiction, but if alternative WW2 is your thing it is worth a read. Some obvious scenarios here for those buying into Warlord's Konflict 47 rules.
Posted by Balkandave at 09:00