The first stage of my 1848 Hungarian Revolution project is now completed and the forces have skirmished on the tabletop.

First up we have the Grenadiers. The Austrian army of this period was unusual in that it had no guard units. However, there were 20 independent Grenadier battalions. 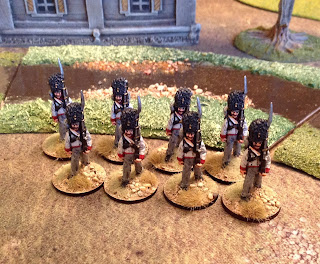 Then we have the backbone of the army, the 58 line regiments. However, they rated fairly low in the pecking order of military service and many units, outwith Italy and the Military Border, were constantly understrength. Financial constraints meant men were sent on unpaid leave after initial training, only to be recalled for manoeuvres and emergencies.

Strategy, tactics and equipment largely dated from the Napoleonic period. The exception was infantry muskets. Starting in 1835, first line units received percussion pill-lock conversions and specialist percussion rifles were issued to the Jagers. This model was further improved in 1842. However, financial constraints meant that ammunition for training was limited to 20 rounds a year for line units. A single round cost the equivalent of a day's ration. This meant marksmanship was poor and very little realistic field training was undertaken. 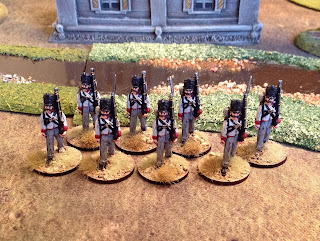 Foreign volunteers were an important source of manpower for the Hungarian army. In particular, many Poles crossed the border from Russian occupied Poland. They formed a Polish Legion. 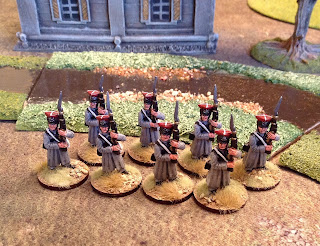 The Hungarian army struggled to equip all its units and this meant many fought with obsolete weapons, some purchased abroad and others locally manufactured.  They also captured weapons from Austrian stocks.

With all the current Steve Barber range completed, it's time to get them onto the tabletop. This is a skirmish project (famous last words!) so I decided to use the Skirmish Kings version of 'The Men Who Would Be Kings' rules. Essentially this means half strength units, while retaining the normal rules. I made the Hungarian militia units and the Polish Legion irregular with obsolete rifles, while the Austrians are all regular.

I choose a simple skirmish scenario over a stream. First blood to the revolution as they swept away the Austrians. 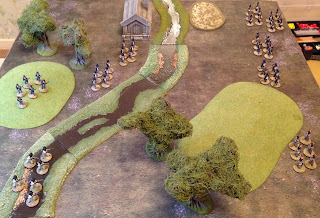 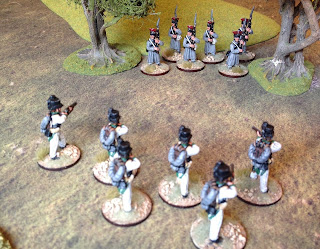 Austrian Jagers attack the Poles who gain cover in the woods. 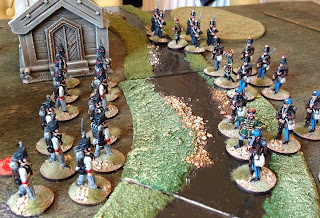 Honved units storm across the river.
Posted by Balkandave at 15:14