Anchialos 917 - To The Strongest

This August is the 11th centenary of the decisive Bulgarian victory over the Byzantines at the Battle of Anchialos 917, near the modern town of Pomorie on the Bulgarian Black Sea coast. OK, maybe not a centenary as memorable as the Somme, but to the Balkan enthusiast these things matter!

The infant Byzantine emperor was due to marry a Bulgarian princess, but the power behind the throne was his mother Zoe, who led a palace coup to oust the regent. She repudiated the marriage plans and this provoked Symeon into war.

Bulgarian troops ravaged Thrace and Byzantium adopted their normal practice of seeking allies by sending envoys to the Serbs, Magyars and Pechenegs. The Pechenegs did come south, but either because of failed negotiations with the divided Byzantine leadership, or counter moves by the Bulgarians, they withdrew. This left the Byzantines to face Symeon alone.

The Byzantine fleet landed an army led by Leo Phocas at Anchialos. Symeon kept his army in the mountains overlooking the landing.

The course of the battle is unclear, but it appears that the Byzantines started well, forcing the Bulgarian right wing back to the hills. However, the Byzantines became disorganised, possibly because of a rumour that Phocas had been killed. Symeon rallied his cavalry and counter attacked, supported by an infantry advance. This brought the Byzantine advance to a halt and then a disorderly retreat.

Phocas himself managed to escape to the coast, but his army was not so fortunate. It was reported some 70 years later that the skulls and bones of the fallen could still be seen strewn across the battlefield.

I refought the battle using Simon Miller's, To The Strongest rules. I used the minimum size in 15mm (50mm squares) as my armies for this period are not large. I have been meaning to use these rules again since Xmas, when some posh crackers produced two packs of small 40mm x 50mm playing cards - just the job!. 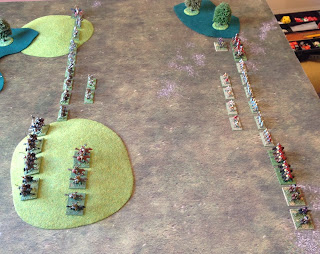 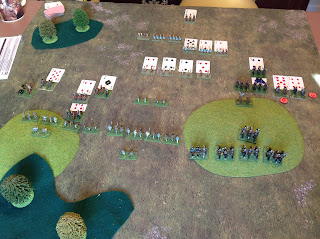 For more on the battle have a look at my feature article at Balkan Military History.