Not a new book (published in 2008), but I picked up a copy of Michael Kulikowski's 'Rome's Gothic Wars' in a London bookshop recently.

There is a lot of academic controversy over the origins of Goth's, before they impinged on the Roman Empire. I have previously read Wolfram's heavyweight tome 'History of the Goths' and older studies by Bradley and Hodgkin. Kulikowski takes the general reader through these debates, exploring the very limited sources. The only conclusion anyone can reasonably draw is that we don't know. 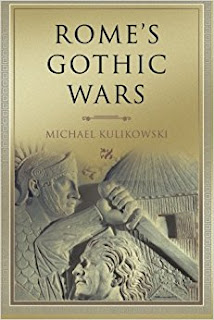 Once they come into contact with the Romans in the 4th century the story becomes somewhat clearer. The early wars, including Constantine's Gothic wars are not well documented, but Constantine certainly defeated some Gothic tribes in 332. One of the challenges is that the Romans didn't overly worry about differentiating between the various barbarian tribes as they viewed them. Added to which, the Goths were themselves made up of a number of tribes.

These early defeats did not significantly weaken the Goths and they participated in several of the internal conflicts within the Empire. Matters changed when they arrived on the banks Danube in 376, it is thought because of pressure from the Huns and Alans, although again sources are limited. The subsequent imperial mismanagement of their admission to the Empire is well known and led to the disastrous Roman defeat at Adrianople.

After this the Goths became an integral part of the story of the later Roman Empire. Culminating in Alaric's sack of Rome in 410. The Goths then found a permanent home and continued to play an important role on the Empire's borders.

This is easily the most readable book on the Goths I have read. Not least because it is the most concise, and none the worse for that!

The Goths are a straightforward army to use on the wargames table. A decent infantry base with archery support, coupled with the offensive arm of effective cavalry. Here are some from my 15mm collection. 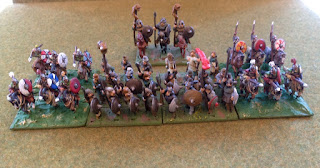