My latest reading has been Gareth William's book on the Viking ruler, 'Eirik Bloodaxe'. Not quite sure why I picked up this modest volume - I blame Last Kingdom! 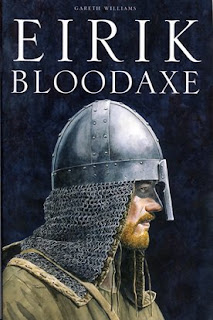 Eirik was the son of Harold Finehair, the first king of a united Norway in the early 10th century. The Vikings really knew how to do nicknames! Needless to say Eirik lived up to his by killing several of his brothers. Although the sagas tell us that he was also a rather weak and henpecked husband. Eirik Henpecked doesn't have quite the same ring to it!

The author picks through what we know about Erik's life and times. Relying quite a bit on the sagas, supplemented from other sources. All are bit after his death. He appears to have briefly inherited his father's throne, after killing off a couple of brothers, but was usurped by his half-brother Haakon.

The story then goes that he came to England and ruled Northumbria, not once, but twice. There are those who are not convinced it was the same Eirik, but this author on balance thinks it was. He either died in battle, possibly at Stainmore, or was assassinated. The saga battle version reads better.

Either way, it's a good story, one that Bernard Cornwell could do really well.

As edges swing,
Blades cut men down
Erik the king
Earns his renown


I'll finish with some gratuitous Viking eye candy from my 28mm army. 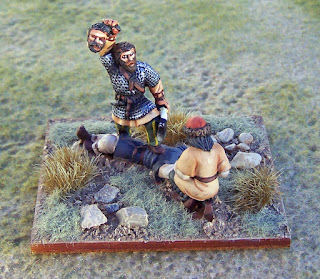