Back to the future in 20mm

Like many wargamers of a certain age, I started the hobby using 20mm Airfix figures. I recently decided to start moderns at small battle/skirmish level. My first thought was 28mm, but when I saw the fabulous ranges of diecast/plastic models in 20mm from a variety of suppliers at very reasonable prices - the choice was made.

I have been picking up a number of models at shows and on ebay. For infantry I have started with the RHModels range and first off the painting bench are some generic East European 'rebels' that will do for a variety of conflicts. 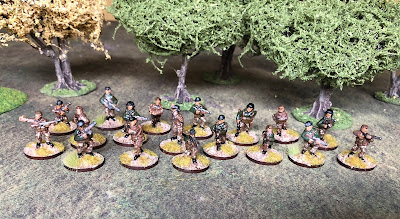 Some Russian armour, not quite state of the art, to go with them. Firstly a T62 tank supported by a BTR60 and BMP. 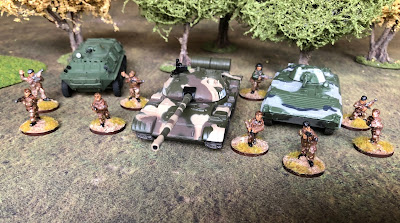 And finally the venerable T55, one of my favourite tanks. 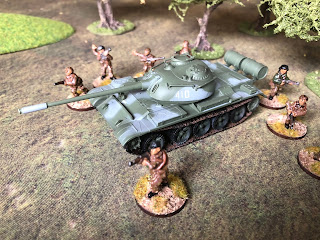 Being a wargames butterfly, I didn't fancy a completely new rule set. So I alighted on a modern variant of Bolt Action. Published by that amazing wargame blogger, Jay's Wargaming Madness. It's a beautifully produced QRF that keeps broadly to the core rules, so are easily picked up. He also has army lists for all the main nations.

Jay recently published unit summaries for Song of Ice and Fire, before I had even painted my first unit! Some guy!

Next up with be a British intervention force. A Challenger and two Warriors have been purchased and a couple of infantry squads undercoated. The Osprey camo is going to be a challenge!
Posted by Balkandave at 17:26