My visit to the Peloponnese in May, with its many early Greek sites, piqued my interest in this period. An Osprey is always a good starting point and Warrior 180, by Raffaele D'Amato and Andrea Salimbeti, doesn't disappoint. 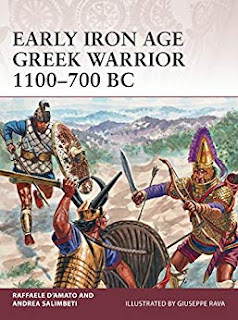 The palatial societies represented by the sites of Mycenae and Tiryns I visited in May, began to decline rapidly in the 13th century BC. Historians are divided on the causes - disease, catastrophic events or the Sea Peoples are usually cited. This led to smaller scale cities during the period covered by this book.

Iron became the principal metal used for weapons, but warfare was on a small scale, largely based on a small warrior class and raiding actions. This era predates the Hoplite armies that are familiar to most wargamers.

The authors take us through the chronology of the period that covers the Late Helladic and Geometric periods. The archeology gives an indication of weaponry that includes spears, javelins and swords, with limited use of missile weapons, including bows and slings. A range of helmets have survived along with shields that are somewhat smaller than the later Hoplon.

The warlord and his warriors training, discipline and beliefs is more speculative. The authors take us through the evidence, including the use of chariots, siege warfare and naval actions.

It is a period suited to skirmish games, with figures that are colourful and interesting. As illustrated in the excellent colour plates by Giuseppe Rava. I have too many projects at present, but it's a period I might return to.