This is the story of the Hungarian King, Matthias Corvinus and the fate of his lost library by Marcus Tanner. History and books, what's not to like! 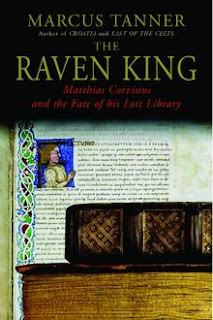 Matthias Corvinus, or Hunyadi in Hungarian, was the son of the better known Janos Hunyadi, the great medieval warlord and crusader who at least slowed the Ottoman advance into Europe. Matthias ruled Hungary from 1443 to 1490. This was a much larger state than the Hungary we know today, encompassing Bohemia, Silesia, Transylvania and Croatia - even capturing Vienna, displacing the early Habsburgs. Hungary was a superpower of the age and Matthias's 'Black Army' was a formidable force.

He was the main bulwark against the Ottomans and a truly renaissance monarch. The arts and science were probably appreciated at his court more than any other, outside of Italy. This was reflected in his great library, possibly containing 8-10,000 works, only exceeded by the papal library in Rome. It is worth remembering that these were hand copied books, usually beautifully illustrated.

After his death, Hungary collapsed following the Battle of Mohacs in 1526. The library was looted by the Ottomans when they reached the capital Buda - or what was left of it after Mary, the last Queen fled. The library has reached an almost mythical status and many efforts have been made to track down its contents. Numerous volumes have been found and many exist in libraries and museums across Europe and beyond.

This book tells the story of the library and the efforts to find the contents. In doing so the author provides a narrative history of the period and Matthias's reign. A period that is not well known and the author brings it to life in an unusual way through the story of the great library.
Posted by Balkandave at 17:38