Alexander Mladenov and pals have written a history of the Bulgarian Air Force in the Second World War, published by Helion. 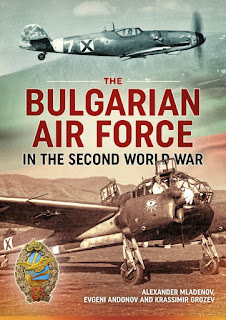 The Bulgarian Air Force at the outset of WW2 was a modest force, equipped with largely obsolete aircraft. Bulgaria joined the Axis on 1 March 1941 and declared war on Britain and the USA nine months later. However, it didn't declare war of the Soviet Union. This meant its role was limited to occupation duties in Yugoslavia, and later, air defence against Allied bomber raids in Bulgaria and elsewhere in the Balkans.

There was a small indigenous aircraft industry, which turned out a small number of recce and ground support aircraft. These 1920's designs were still operational by the outset of the war. Slightly more modern designs came from the Caproni factory in Kazenlak. By 1937 Bulgaria had thrown off the post WW1 treaty restrictions on the air force and took delivery of German aircraft including the Heinkel He45b and Arado Ar65F. They also acquired some Polish PZL and German Dornier Do17 bombers.

The German invasion of Czechoslovakia and France enabled the purchase of second hand Letov S328 recce aircraft, Avia B 71 bombers and D.520 fighters. It wasn't until later in the war, when allied bombers could reach the Balkans, that the Germans gave any priority to Bulgaria. By 1943, the Bulgarian 'Dogan' bi-plane fighters were hopelessly outclassed and BF-109's provided the effective air defence of Sofia.  The D.520 was still a decent fighter against bombers. Other German aircraft supplied to Bulgaria included Stukas, AR 196 floatplanes, Fw 189 recce and Ju 52 transports.

When the Soviet steamroller entered Bulgaria the country switched sides, and German aircraft took part in ground attacks against the retreating German army. Soviet types only started to replace these aircraft at the end of the war.

The strength of this book is in the lavish use of photographs and nine pages of colour plates. I confess to finding the description of air warfare hard work, and this book is no different. Air operations are described in some detail for all stages of the conflict.

This is probably the final word on the Bulgarian Air Force during WW2. It has everything you could want to know and more.