The second tranche of books for my South Africa trip focuses on the Boer War, sometimes called the Second Boer War.

I picked up a copy of Thomas Pakenham's 'The Boer War' in Hay-on-Wye at Richard Booth's Bookshop. Richard Booth died this week, and the Guardian obituary pays a fine tribute to the founder of Hay-on-Wye as a book town. He was, without doubt, a British eccentric of the best kind and my bookshelves are full of books from than lovely town in the Welsh borders. 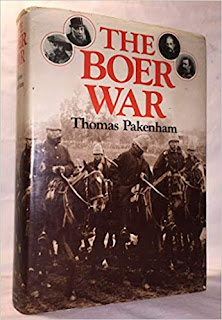 My knowledge of the Boer War is relatively limited. I did think as I surveyed this hefty tome of 659 pages, why the Osprey essential histories wouldn't do the job! However, I am glad I didn't because, despite its length, this is a very readable study of the conflict. Pakenham spent eight years researching this book using original sources. It is genuinely a 'magisterial' piece of work.

No one comes out of his analysis particularly well. That includes the politicians in London and South Africa, or the Generals. Like the Zulu War, this was mostly an avoidable conflict, avidly promoted by imperialists like Cecil Rhodes (and his 'Gold Bugs') and Alfred Milner the High Commissioner for South Africa. I was agnostic about the campaign to take down Rhode's statue at Oxford University, but I am slightly more sympathetic after reading this book.

The leaders of the two Boer states were not much better as their actions played into the imperialist's hands. As a consequence, some 22,000 Imperial and Colonial troops lost their lives, together with 7,000 Boer troops. A further 18,000 to 28,000 Boer men, women and children died in the concentration camps. There are no accurate records of how many Africans died, but it was probably more than 12,000 'black Boers' and an unknown number who served with the Imperial forces. The so-called 'White Man's War', was nothing of the sort on either side.

This was supposed to be a small war; the type the British army was used to fighting across the Empire. By the end of the war, a staggering 365,693 imperial and 82,742 colonial troops fought in the conflict, against 87,365 Boers. Sadly, the military lessons of the war were ignored. It wasn't the marksmanship of the Boers; it was that the smokeless, long-range, high velocity, small-bore magazine bullet from rifle or machine gun, plus the trench, had decisively tilted the balance against the attack and in favour of the defence.

I have decided to wargame this conflict in 10mm, initially using the Pendraken range of figures. So, my reading has also included two Osprey titles; The Boer Wars (2) and Boer Commando. These cover all the main troop types, with the usual mix of concise text and colour plates. 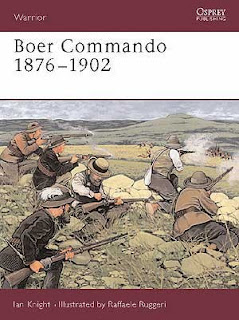 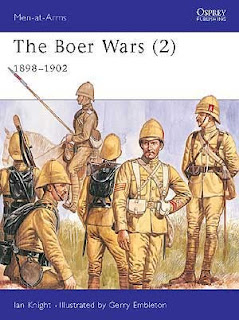