This is a new paperback edition of Stevan Pavlowitch's book on The Second World War in Yugoslavia. The events before and particularly after the Axis invasion are, to put it mildly, complex. They have also been the subject of historical revisionism, particularly since the death of Tito, which makes the author's objective analysis very welcome. 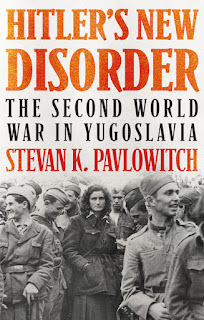 The book is structured as a broad narrative history of the events, starting with the end of the Kingdom of Yugoslavia and the new structure imposed by the Axis powers. This involved the dismemberment of Yugoslavia with a German-controlled residual Serbia, a puppet state of Croatia and a range of annexations of territory around the fringe.

The insurgency started almost immediately with Mihailovic's Serbian nationalist Ravna Gora Movement making early progress while Tito's communist-led partisan movement struggled to survive under Axis pressure. The fascist Croatian puppet state did its best to make it difficult for their Axis allies through the terror inflicted by the Ustase. Successive German commanders sought to replace the Ustase, recognising the problems they caused for the occupation, but Hitler rejected every request. Although it should be stressed that the Wehrmacht also committed atrocities in Yugoslavia, particularly units led by former Habsburg officers.

Muslims in Bosnia came under pressure from all sides and even sent a plea to the Turkish National Assembly to support massive migration. They settled for a mix of self-defence groups and even joined a Muslim SS Division in order to get weapons and protect their villages. As the war progressed more joined the partisans.

The fall of Italy in 1943 mostly benefited the partisans in terms of equipment and they used that to engage in more effective resistance to the occupation. Mihailovic never had quite the same degree of control of the varied groups of chetniks, many of which tacitly, and in some cases openly, collaborated with the Germans. The Allies shifted their support to Tito when it was obvious from German intercepts that the partisans were the only real resistance. Accepting that the first priority of both factions was to destroy the other and place themselves in a position to control the post-war state. Mihailovic even admitted to his British liaison officer that he would attack the Germans only when he had dealt with the "partisans, ustashas, Muslims and Croats". That didn't leave much of the population to build a movement around!

The western Allies engaged in extensive deception operations that threatened to invade the Balkans. These were believed by most of the internal players and Hitler, even if the German army was sceptical. In the end, it was the Soviets who arrived in the Balkans, and with their support, Tito was able to secure his position as the future government. We should not forget that Yugoslavia suffered greater human and material loss than in any other European country, except Poland and the Soviet Union.

The narrative of this conflict is complex and nuanced. I have read many histories of the period and this book is one of the best explanations I have read.