We are back to Zoom games due to the pandemic restrictions in Scotland. While this isn't as good as the real thing it does have the advantage of engaging with friends from overseas. As my current project is the War of 1812, a game with an American seemed very appropriate.

First up I needed to finish the outstanding units. These are the US line infantry from the Old Glory range. I really should do standard units first, but like most wargamers, I am drawn to the most interesting units.

I have plenty of British figures but the Canadian militia had distinctive headgear, so a pack of them will make my British army a lot more authentic.

Games over Zoom have to be kept very simple so we went for 'Rebels and Patriots' with a standard 24 point force for each side. 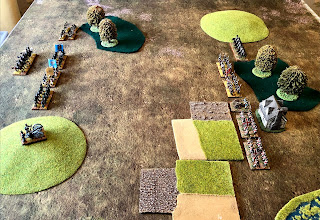 This was a straight-forward lineup and the Americans advanced first with the centre pushing ahead. The US artillery struck first blood, being well positioned on the hill and quickly disordered one of the British line units. 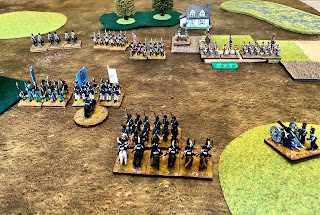 The US rifle unit with its expensive 'good shots' upgrade planned a sneaky move through the woods to flank the Canadian militia or shoot up the light dragoons. However, disaster struck with them failing their activation roll four times! I have now learned a few new American expletives from my opponent! 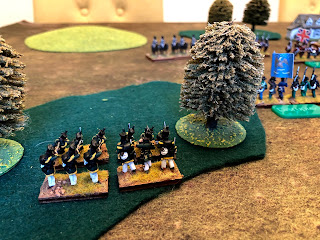 This left the centre cruelly exposed to British volley fire, and after a few rounds, it was game over. The rifles eventually arriving when it was all done and dusted. 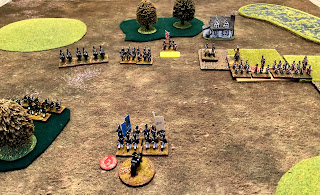 A comprehensive victory for the Brits and Canada is saved for the Empire. Technically Canada didn't exist but you get the drift. Rebels and Patriots work well for this conflict but I have a fancy to try a scaled-down game of Blucher with these figures next.