The Greek-Turkish War of 1919-22 is often forgotten amongst the great conflicts of the period including the Balkan Wars and the First World War. However, it was a large-scale conflict with massive consequences for millions of ordinary people, which continue to reverberate to the present day.

This major new book, edited by Konstantinos Travlos, brings together a range of academics to consider different aspects of the conflict. The book is divided into three parts, broadly covering the causes of the war, its conduct and the aftermath. This is not a purely military history of the conflict. All wars have their political and economic context, which are important in understanding the military conduct. The Greek-Turkish War was as Travlos says in his introduction, “a political war par-excellence”. 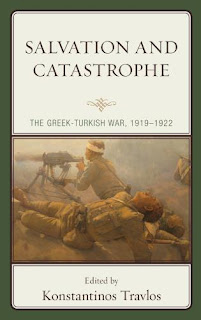 The first section covers the political causes of the war, and the leaders, Eleftherios Venizelos and Mustafa Kemal (later known as Ataturk). For Venizelos the war aims were ostensibly to achieve the Megali Idea (Great Idea), a Greek state that would include the large Greek populations within the Ottoman Empire. Although one author argues that this was a tool rather than a goal, he was driven by the need to protect the physical and economic security of Greek populations under foreign rule. Kemal’s political goals were also nationalist, rebuilding a Turkish state for Turks out of the remnants of the multinational Ottoman Empire after the First World War.

The trigger for the war was the decision to send a Greek army to Asia Minor in 1919. This book isn’t a narrative history of the war, so if you are not familiar with the conduct of the war, it is worth reading a potted history first. What you do get is an examination of the causes of Greece’s defeat, a war which was almost entirely financed by France, Britain and the USA. I certainly had realised by just how much and the loss of this international support after Venizelos lost the 1920 elections and the restoration of King Constantine, damaged the Greek effort along with national division.

Militarily, the war started well for the Greeks when they landed in Smyrna and secured the Greek population areas. However, as Kemal reorganised the Turkish armies, the Greeks needed to destroy them to conclude the war. This meant an advance towards Ankara that resulted in extended supply lines and large areas to garrison. By September 1921, they were on the defensive which eventually collapsed under the Turkish counter-attack. This was not helped by political culling after the Greek elections on a scale that would have embarrassed Stalin! Unsurprisingly, replacing battle-hardened officers with inexperienced political placeholders didn’t do much for the effectiveness of the Greek army. This added to exhaustion, lack of supplies and high casualties eroded the morale of the conscripts.

These factors were exploited by the Turks, notably by the development of a strong cavalry arm, making a comeback in this conflict after WW1. They were able to wreak havoc on the Greek supply lines, while the infantry dug in and bled the Greek infantry attacks dry in front of their fortifications. When it came to the Great Offensive, the Turks were able to achieve local superiority concentrating 70% of their available strength against about 56% for the Greeks. This led to a monumental battle of encirclement and annihilation on par with the German victory at Tannenberg in 1914. At the tactical level, the chapter on the Turkish use of German assault troop doctrines (Stormtroop tactics), is particularly interesting. Ottoman troops had been trained by the Germans, and this was developed by Kemal and his commanders, although they lacked the same levels of equipment, organisation and education of NCOs.

Even if you know little about this war, you have probably heard about its aftermath, the massive population exchanges. This was not unique to this conflict and had happened as a consequence of the earlier wars, albeit not on this scale. Around 360,000 Muslims of Greece went to Turkey, and 1.2 million Greek Orthodox went in the other direction. Chapters in this book explain the complexity of the issue. For example, the Turkish speaking Orthodox Karamanlis were expelled to a country they had no affiliation with and didn’t speak the language. The test, unusually for a secular nation building project was effectively religion, not language.

The Greek-Turkish War was one of the major aftershocks of WW1 and led to the establishment of the modern Republic of Turkey, whose leaders until the 1950s commanded armies in the war. This is a substantial tome, which takes a detailed inter-disciplinary approach to the subject. It is clearly aimed at an academic audience, and the general reader may find some the theoretical analysis a little hard going. It is also outwith the price range of most readers who may want to persuade their library to get a copy. If they do, they won’t be disappointed.  This is, without doubt, the book to read on the conflict.

For the wargamer, I would start with the Osprey on the war. Then move onto this book, which adds much to our understanding of the conduct of the war. There are several unusual units, but I use my Greek and Turkish armies of WW1 and some from the Balkan Wars. 15mm for rules like Bloody Big Battles, and 28mm for Bolt Action. While there was trench warfare, it also has more open battles as well as raids and small unit actions.